The test environment is very basic, a three-node Group Replication (mysql1,mysql2,myslq3) on MySQL 8.0.19 with default settings. mysql2 is the Primary node.

In this scenario, I was testing a partial network failure when a node gets separated from the primary, but other nodes still can see it. 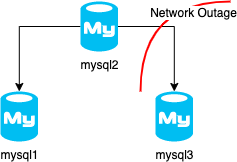 You would think mysql3 is going to lose quorum and exit the cluster, but no. Inside the cluster, all the nodes are in constant communication with each other, not just the primary talking with mysql3 but also mysql1 is talking to mysql3. 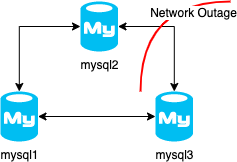 If we ask the cluster status from the primary, it will say mysql3 is unreachable.

But if we ask the status from mysql1 it will say everything is fine:

But What Does This Mean?

Can I still write the cluster? Will mysql3 get new changes as well? To answer these questions, let’s do some simple tests.

I have created a simple table:

Now I have started the following loop on the primary:

It is going to simple insert the hostname as many times as it can. I leave this running in the background.

I opened two ssh connections, one to mysql2(primary) and one to mysql3 and ran following loop:

It is going to print how many lines were inserted on mysql2 and mysql3 per every second.

I cut the network between mysql2 and mysql3 by using iptables:

After this, mysql3 is still getting the changes, but how? It is not able to connect to mysql2.  But it is still able to connect to mysql1 which is going to act as a kind of relay node between mysql2 and mysql3. This sounds great because even in case of a partial network outage, we still could use mysql3 because it gets the changes. However, this behavior is not documented anywhere. So I do not know how it works under the hood. I opened a bug report to update the documentation.

However, I also noticed there is a serious performance degradation because of this. When all the nodes were connected, I was able to insert 60-80 rows per second. As soon I cut the network, that number went down to 2-5 inserts per second, which is 80-90% degradations. That could severely impact the performance of any application, which means with Group Replication even partial network outage, or a wrongly implemented Iptables rule, etc.. could cause production problems.

Because it is poorly documented, I can not be sure why this is happening. In Group Replication, it is enough for the majority to acknowledge the transactions, so in theory, mysql2 and mysql1 would be enough so we can not explain this degradation with network latency because of the extra hop.

I have also opened a bug report for this, which is already confirmed.

How Does This Work with Percona XtraDB Cluster?

Percona XtraDB Cluster is based on Galera, which is another clustering solution for MySQL. In Galera, this behavior is well known; a node can act as a relay node even between data centers. I repeated the same tests on a three-node PXC8 cluster as well. When I cut the network between the primary node (where I write) and mysql3 there was a 3-second gap until the cluster recalculated the cluster view and re-routed the traffic, after that everything went back to normal there was no measurable performance impact, mysql3 was getting all the changes trough mysql1:

Also, in PXC8, all the nodes reporting the same cluster status even mysql2.

Because Group Replication and Galera implementation and approach are different, you can see the impact on performance is also different. Galera has a better tolerance for network issues than Group Replication. I am going to publish a much longer blog post, which will discuss other failover/disaster scenarios as well.