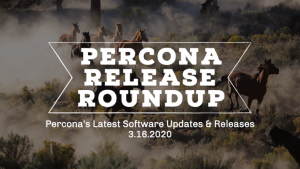 Today’s post includes those which have come out since March 2, 2020.

On March 16, 2020, Percona announced the release of Percona DBaaS Command Line Tool 0.1.0 early access, which acts as a middleware making a standardized way to automate the deployment, management, and scaling of containerized databases. It is a powerful instrument providing a unified way for the user to have a Database as a Service (DBaaS) like experience, built on top of the Kubernetes-based cloud infrastructure such as Google Kubernetes Engine. Note: This is an early access release. It is not recommended for production environments.

Also on March 16, 2020, Percona XtraBackup 8.0.10 was released. It enables MySQL backups without blocking user queries, making it ideal for companies with large data sets and mission-critical applications that cannot tolerate long periods of downtime. In 8.0.10, several bugs were fixed, including XB-1982 where thehistory table showed a wrong value for lock_time, and PXB-2118 where the undo log file was renamed incorrectly to undo tablespace name after restore.