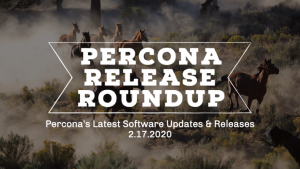 On February 4, 2020, we released Percona Monitoring and Management 2.2.2. It is a free and open-source platform for managing and monitoring MySQL, MongoDB, and PostgreSQL performance. In this release, the optimization of the Query Analytics parser code for PostgreSQL queries allowed us to reduce the memory resources consumption by 1-5%, and the parsing time of an individual query by 30-40%

Percona Server for MySQL 5.7.29-32 was released on February 5, 2020. It is a free, fully compatible, enhanced and open source drop-in replacement for any MySQL database. This version includes several bug fixes, including PS-1469 where the Memory storage engine detected an incorrect “is full” condition, PS-5813 when setting the slow_query_log_use_global_control to “none” could cause an error, and PS-6123, when a Debian/Ubuntu init script used an incorrect comparison which could cause the service command to return before the server start.

On February 6, 2020, Percona Server for MongoDB 3.4.24-3.0 was released. It is an enhanced, open source, and highly-scalable database that is a fully-compatible, drop-in replacement for MongoDB 3.4 Community Edition while extending functionality by including the Percona Memory Engine and MongoRocks storage engines, as well as several enterprise-grade features such as External Authentication, Hot Backups, and Log Redaction. This release is based on MongoDB 3.4.24, and there are no additional improvements or new features on top of the changes in the upstream version.

On February 11, 2020, we announced that ProxySQL 1.4.16, released by ProxySQL, is available for download in the Percona Repository along with an updated version of Percona’s proxysql-admin tool. ProxySQL is a high-performance proxy, currently for MySQL and database servers in the MySQL ecosystem (like Percona Server for MySQL and MariaDB). It acts as an intermediary for client requests seeking resources from the database. In this version, bug PSQLADM-219 was fixed, where the scheduler was handling the pxc_maint_mode variable incorrectly and open connections were closed immediately. Now the scheduler only sets the node status to OFFLINE_SOFT.

On February 17, 2020, we released Percona Server for MongoDB 4.0.16-9. With the Percona Memory Engine in-memory storage engine, HashiCorp Vault integration, Data-at-rest Encryption, audit logging, External LDAP Authentication with SASL, and hot backups, it’s a complete package that maximizes performance and streamlines database efficiencies. This release is based on MongoDB 4.0.16 and does not include any additional changes.