Observability Differences Between MySQL 8 and MariaDB 10.4 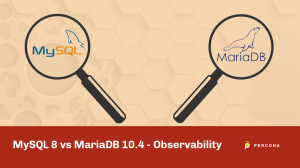 In summary, there are a lot of differences that have accumulated through the years; a lot more than I expected.  Here are some highlights.

If you want to access SHOW [GLOBAL] STATUS output through tables, they have been moved to performance_schema in MySQL 8 but they are in  information_schema in MariaDB 10.4, meaning you need to use different queries.

The other difference you may notice is how VARIABLE_NAME is capitalized. It is all capitals for MariaDB and leading capital in MySQL, which can be a problem if you store data in a case-sensitive datastore.

MariaDB 10.4 also exposes more variables in the SHOW STATUS (542) while in the current version of MySQL 8 it is less than 500.

Another example of the tables that MariaDB 10.4 provides is current InnoDB Semaphore waits as INNODB_SYS_SEMAPHORE_WAITS  or  USER_VARIABLES to show currently set User Variables:

MySQL 8 does not have this particular table but provides similar functionality via the USER_VARIABLES_BY_THREAD table in PERFORMANCE_SCHEMA.

Note that quite different information is provided in those tables!

There is also a lot of difference in what is available from the MariaDB 10.4 processlist table. Most significantly, you can discover how many rows were accessed (EXAMINED_ROWS) as well as the memory used by the query:

Compare this to MySQL 8:

I like how MariaDB adds a couple of practical fields here which are available simply and efficiently.  MySQL provides much more extended sys.processlist table as part of SYS_SCHEMA (driven by data from Performance Schema), but it is a lot more difficult to query.