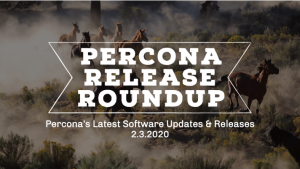 Every few weeks we put together a Release Roundup which showcases the latest in software updates, tools, and features to help you manage and deploy our software, with highlights and critical information, as well as links to the full release notes and direct links to the software or service itself.

Today’s post includes those which have come out since January 20, 2020, including bug fixes in Percona Server for MySQL, a new RDS Exporter section added to the Prometheus Exporter Status dashboard in Percona Monitoring and Management, and a fix for an issue with restoring backups in Percona Backup for MongoDB.

On January 21, 2020, Percona Server for MySQL 5.6.47-87.0 was released. It includes all the features and bug fixes available in MySQL 5.6.47 Community Edition in addition to enterprise-grade features developed by Percona.  In 5.6.47-87.0, several bugs were fixed, including #5813 when setting ‘none’ value for slow_query_log_use_global_control throws an error, #6750 where Red Hat Enterprise Linux 8 had a file conflict when installing client packages, and #6023 when Percona Server exits when a Kerberos password is changed after the password has expired.

Also on January 23, we released Percona Monitoring and Management 2.2.1. It is a free and open-source platform for managing and monitoring MySQL, MongoDB, and PostgreSQL performance.  In 2.2.1, improvements and features include the Prometheus dashboard and the Exporters Overview dashboard being updated to include the rds_exporter metrics in their charts, the “Search by” bar on the Query Analytics dashboard renamed to “Filter by” to make its purpose more clear, and the DB uptime singlestats in node rows on the Home dashboard were changed to show minimal values instead of average ones to be consistent with the top row. In addition, several bugs were fixed, including PMM-5232 where the pmm-managed component of the PMM Server 2.2.0 is vulnerable to DoS attacks that could be carried out by anyone who knows the PMM Server IP address.