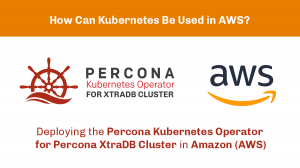 Being that Amazon is one of the most-used cloud vendors, it is only natural that one may ask “How can Kubernetes be used in AWS?“. And the answer is – not that different than with other cloud vendors. What one needs is two things (and this applies universally): a Kubernetes cluster + the Percona XtraDB Cluster (PXC). Let’s start by creating the K8S cluster.

Like every other major cloud vendor, Amazon also has its own service available to make easy the task of creating and maintaining a K8S cluster called Amazon Elastic Kubernetes Service (EKS). There are two ways to create the cluster: one is using a tool called eksctl (which is the one we are going to use) and the other one is using the AWS management console which is a more manual approach. Now, before deploying the cluster with eksctl, there are a few requirements that need to be met:

There is more than one way to get kubectl. We are going to install the binary hosted by Amazon (compatible with the upstream version). The following steps are for Linux:

Once that is done, you can verify that the installation was done properly by asking for the version: kubectl version –short –client.

To get the new (experimental) AWS CLI version 2, run:

You can export the /usr/local/bin path to the environment variable PATH so you can use the “aws2” command directly.

Similar to the previous installations, just run the following commands as described in the AWS IAM authenticator documentation:

Don’t forget to configure your AWS CLI credentials, for example (not real info):

Now we are ready to deploy the Kubernetes cluster.

And now the moment of truth. To create the cluster, one just needs to execute one command (with several parameters), but that is pretty much all. For this case, the command looks like this:

The parameters used are just a small subset of everything that is available, and one that can seen by running “eksctl create cluster –help”, but for this case what we asked of EKS is to create a cluster named Percona using K8S version 1.14, in the aws region us-east-2 (Ohio), giving a name of percona-standard-workers to the nodegroup, using t3.medium EC2 instances for the nodes, with a total of three nodes (min 1 max 4), and enabling SSH access for the nodes using the SSH public key provided.

Note that all these parameters can be passed using a config file with YAML format, as explained in the documentation. Now, after the command is executed, the cluster is ready to be deployed. This process is not fast and could take around 15 minutes to finish. Be patient.