Following my post from a year ago about ClickHouse I wanted to review what happened in ClickHouse since then. There is indeed some interesting news to share. 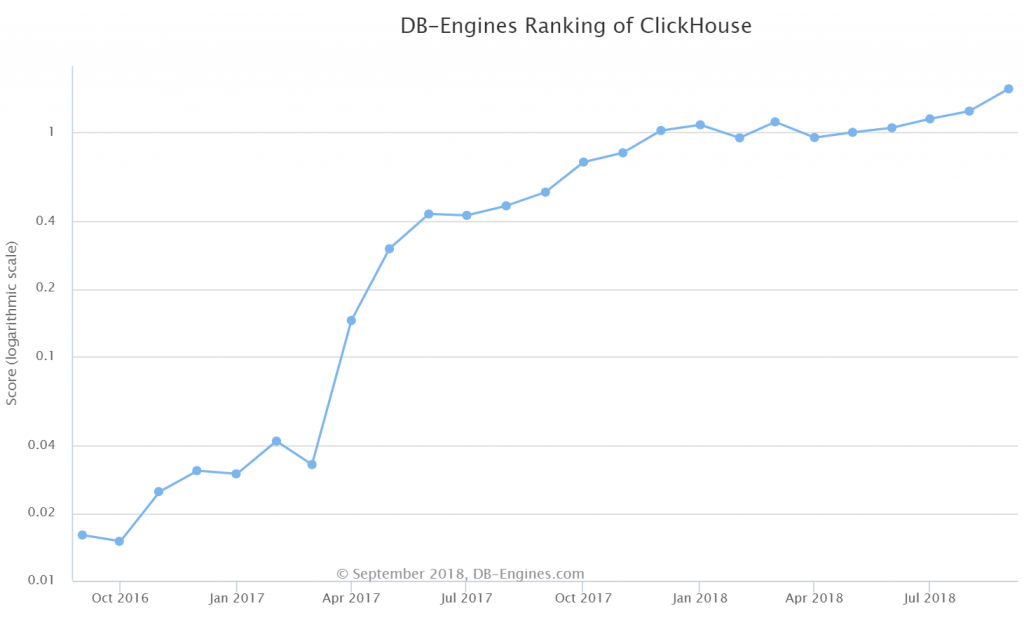 And indeed, in my conversation with customers and partners, the narrative has changed from: “ClickHouse, what is it?” to “We are using or considering ClickHouse for our analytics needs”.

3. Support of the more traditional JOIN syntax. Now if you join two tables you can use SELECT ... FROM tab1 ANY LEFT JOIN tab2 ON tab1_col=tab2_col .

So now, if we take a query from the workload described in https://www.percona.com/blog/2017/06/22/clickhouse-general-analytical-workload-based-star-schema-benchmark/

We can write this:

instead of the monstrous:

4. Support for DELETE and UPDATE operations. This has probably been the most requested feature since the first ClickHouse release.
ClickHouse uses an LSM-tree like structure—MergeTree—and it is not friendly to single row operations. To highlight this specific limitation, ClickHouse uses ALTER TABLE UPDATE / ALTER TABLE DELETE syntax to highlight this will be executed as a bulk operation, so please consider it as such. Updating or deleting rows in ClickHouse should be an exceptional operation, rather than a part of your day-to-day workload.

5. ClickHouse added a feature which I call Dictionary Compression, but ClickHouse uses the name “LowCardinality”. It is still experimental, but I hope soon it will be production ready. Basically it allows internally to replace long strings with a short list of enumerated values.

For example, consider the table from our example lineorder which contains 600037902 rows, but has only five different values for the column LO_ORDERPRIORITY:

So we can define our table as:

How does this help? Firstly, it offers space savings. The table will take less space in storage, as it will use integer values instead of strings. And secondly, performance. The filtering operation will be executed faster.

For example: here’s a query against the table with LO_ORDERPRIORITY stored as String:

And now the same query against table with LO_ORDERPRIORITY as LowCardinality(String):

Unfortunately this feature is not optimized for all use cases, and actually in aggregation it performs slower.

An aggregation query against table with LO_ORDERPRIORITY as String:

Versus an aggregation query against table with LO_ORDERPRIORITY as LowCardinality(String):

6. And the last feature I want to mention is the better support of Tableau Software: this required ODBC drivers. It may not seem significant, but Tableau is the number one software for data analysts, and by supporting this, ClickHouse will reach a much wider audience.

Summing up: ClickHouse definitely became much more user-friendly since a year ago!