Why MySQL Stored Procedures, Functions and Triggers Are Bad For Performance

MySQL stored procedures, functions and triggers, are tempting constructs for application developers. However, as I discovered, there can be an impact on database performance when using MySQL stored routines. Not being entirely sure of what I was seeing during a customer visit, I set out to create some simple tests to measure the impact of triggers on database performance. The outcome might surprise you.

Why stored routines are not optimal performance-wise

Recently, I worked with a customer to profile the performance of triggers and stored routines. What I’ve learned about stored routines: “dead” code (the code in a branch which will never run) can still significantly slow down the response time of a function/procedure/trigger. We will need to be careful to clean up what we do not need.

This function simply declares a variable and returns it. It is a dummy function

This function calls another function, levenshtein_limit_n (calculates levenshtein distance). But wait: this code will never run – the condition IF 1=2 will never be true. So that is the same as function 1.

Here there are four conditions and none of these conditions will be true: there are 4 calls of “dead” code. The result of the function call for function 3 will be the same as function 2 and function 1.

This is the same as function 3 but the function we are running does not exist. Well, it does not matter as the select does_not_exit  will never run.

As we can see func3 (with four dead code calls which will never be executed, otherwise identical to func1) runs almost 3x slower compared to func1(); func3_nope() is identical in terms of response time to func3().

Visualizing all system calls from functions

I repeated these steps for all the functions above and then created charts of the commands.

Here are the results: 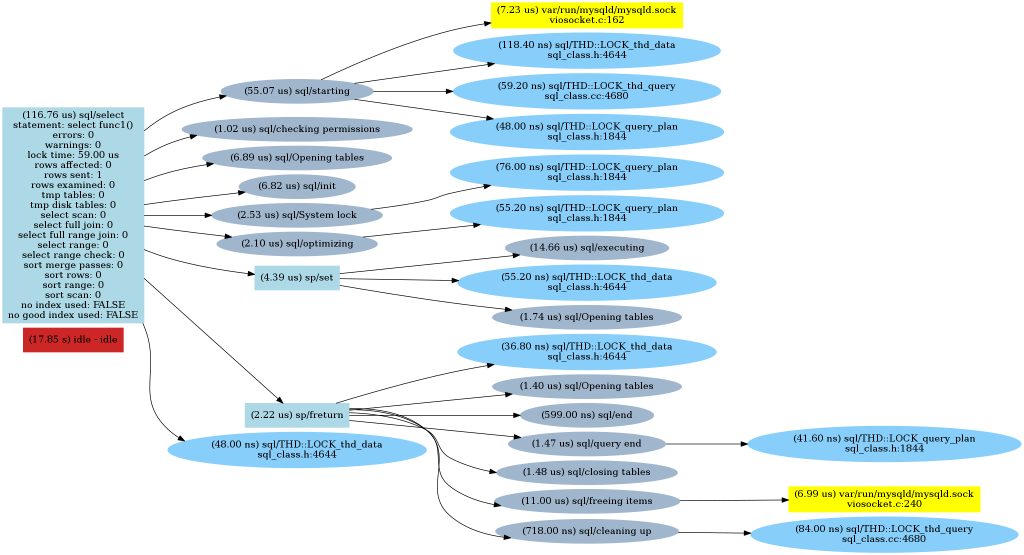 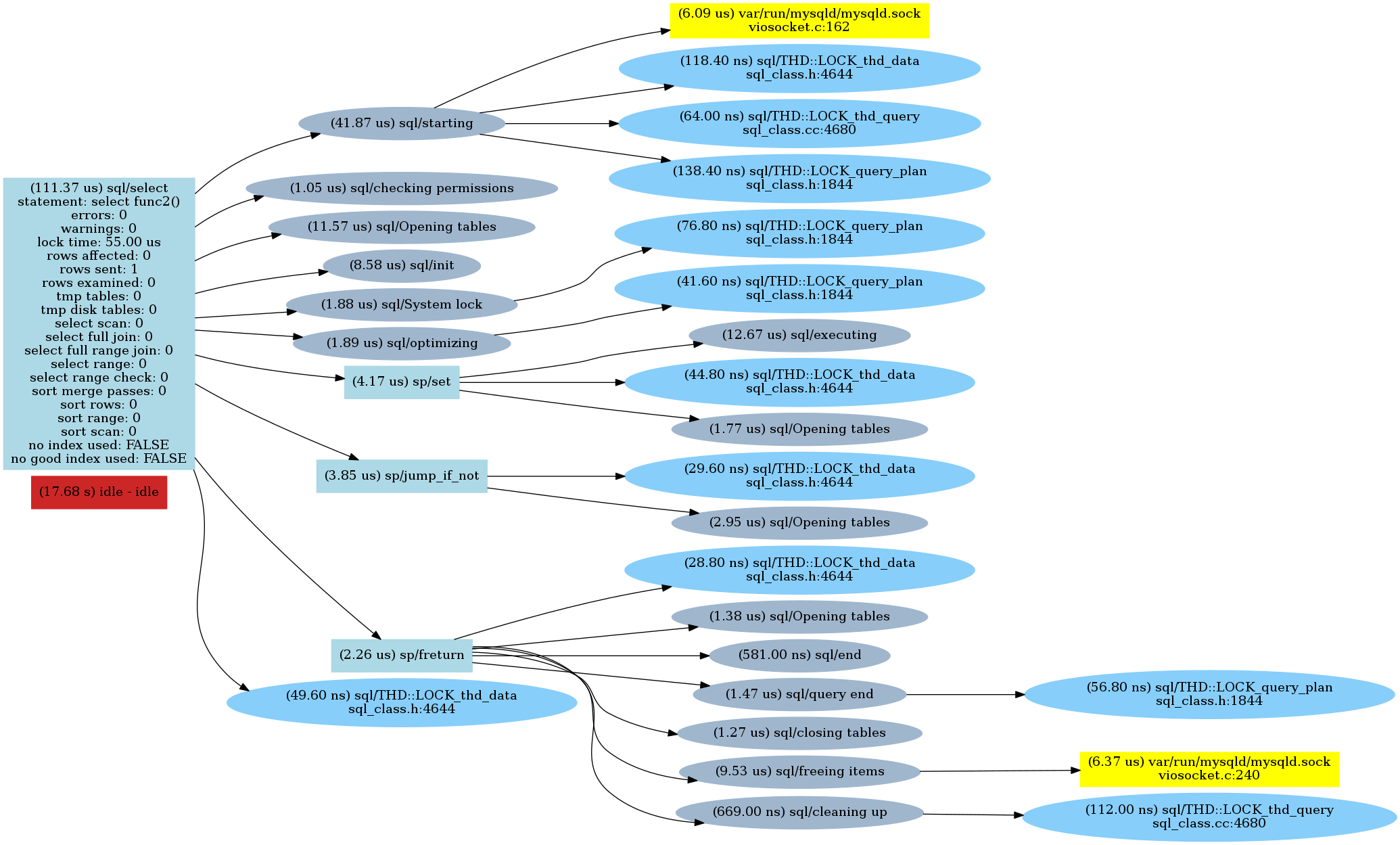 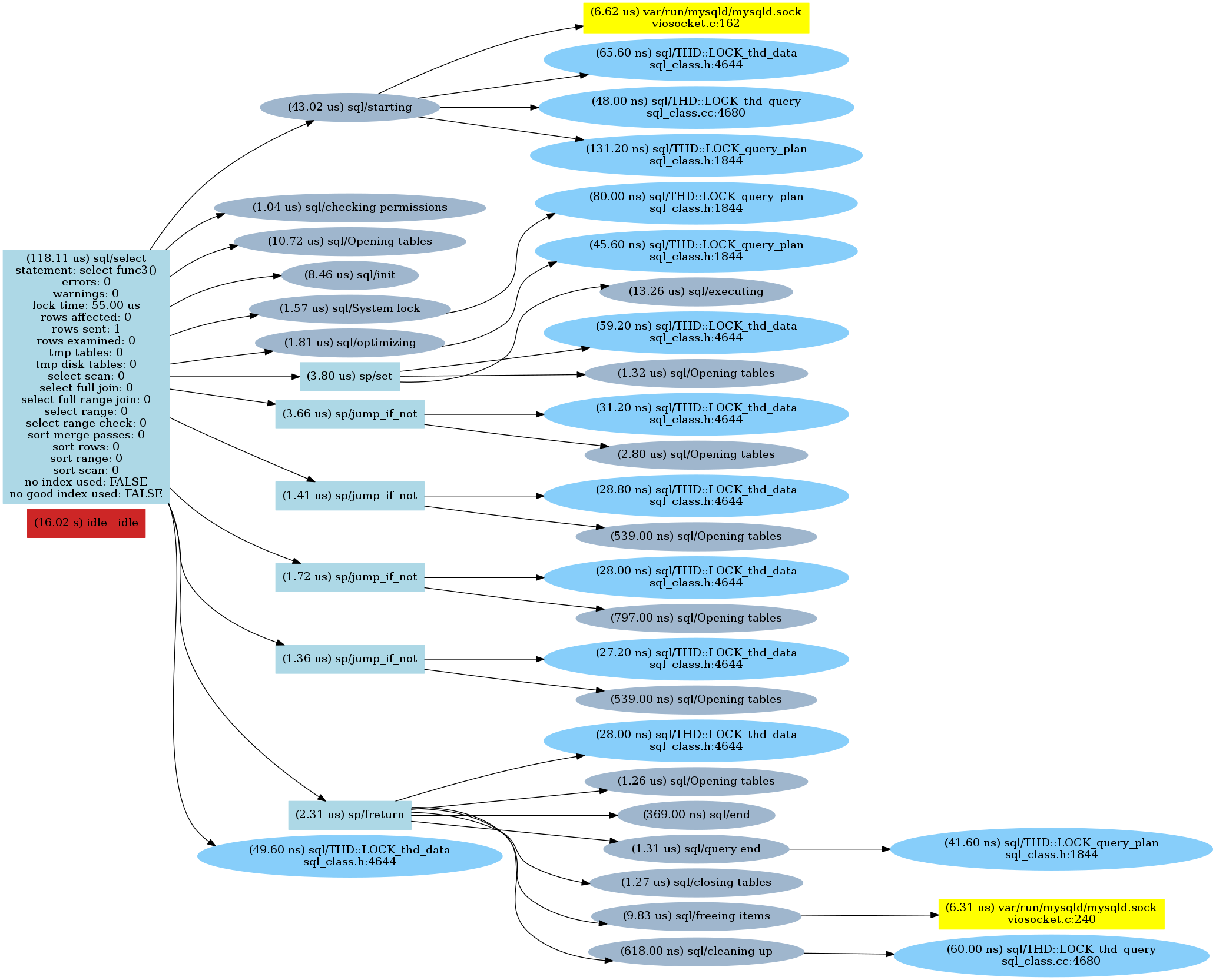 As we can see there is a sp/jump_if_not call for every “if” check followed by an opening tables statement (which is quite interesting). So parsing the “IF” condition made a difference.

For MySQL 8.0 we can also see MySQL source code documentation for stored routines which documents how it is implemented. It reads:

Flow Analysis Optimizations
After code is generated, the low level sp_instr instructions are optimized. The optimization focuses on two areas:

Dead code removal,
Jump shortcut resolution.
These two optimizations are performed together, as they both are a problem involving flow analysis in the graph that represents the generated code.

The code that implements these optimizations is sp_head::optimize().

However, this does not explain why it executes “opening tables”. I have filed a bug.

Well, if we do not plan to run one million of those stored functions we will never even notice the difference. However, where it will make a difference is … inside a trigger. Let’s say that we have a trigger on a table: every time we update that table it executes a trigger to update another field. Here is an example: let’s say we have a table called “form” and we simply need to update its creation date:

That is good and fast. Now we create a trigger which will call our dummy func1():

Now repeat the update. Remember: it does not change the result of the update as we do not really do anything inside the trigger.

Just adding a dummy trigger will add 2x overhead: the next trigger, which does not even run a function, introduces a slowdown:

Now, lets use func3 (which has “dead” code and is equivalent to func1):

However, running the code from the func3 inside the trigger (instead of calling a function) will speed up the update:

Potentially, even if the code will never run, MySQL will still need to parse the stored routine—or trigger—code for every execution, which can potentially lead to a memory leak, as described in this bug.

Principal Architect Yves Trudeau provides a rundown on ZFS performance and how it compares to XFS and EXT4. Read his blog, About ZFS Performance, to learn more.

Percona CEO Peter Zaitsev reviews the newest features in MySQL 8 and how they can help your mission-critical applications in his webinar, MySQL 8 for Developers. Click here to watch the webinar by the Percona co-founder.