In this blog, I’ll look at how to use ClickHouse for parallel log processing.

Percona is seen primarily for our expertise in MySQL and MongoDB (at this time), but neither is quite suitable to perform heavy analytical workloads. There is a need to analyze data sets, and a very popular task is crunching log files. Below I’ll show how ClickHouse can be used to efficiently perform this task. ClickHouse is attractive because it has multi-core parallel query processing, and it can even execute a single query using multiple CPUs in the background.

To analyze workload, I’ll use an Apache log file from one of Percona’s servers. The log has 1.56 billion rows, and uncompressed it takes 274G. When inserted into ClickHouse, the table on disk takes 9G.

How do we insert the data into ClickHouse? There is a lot of scripts to transform Apache log format to CSV, which ClickHouse can accept. As for the base, I used this one:

and my modification you can find here:

To test how ClickHouse scales on multiple CPU cores/threads, I will execute the same query by allocating from 1 to 56 CPU threads for ClickHouse processes. This can be done as:

We must also take into account that not all queries are equal. Some are easier to execute in parallel than others. So I will test three different queries. In the end, we can’t get around Amdahl’s Law!

The first query should be easy to execute in parallel:

It’s much more interesting to chart these results: 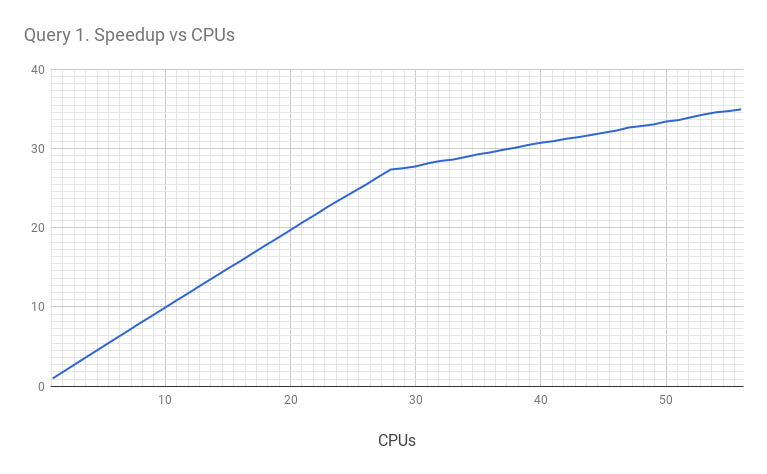 From the chart, we can see that the query scales linearly up to 28 cores. After that, it continues to scale up to 56 threads (but with a lesser slope). I think this is related to the CPU architecture (remember we have 28 physical cores and 56 CPU “threads”). Let’s look at the results again. With one available CPU, the query took 823.6 sec to execute. With all available CPUs, it took 23.6 sec. So the total speedup is 34.9 times.

But let’s consider a query that allows a lesser degree of parallelism. For example, this one: 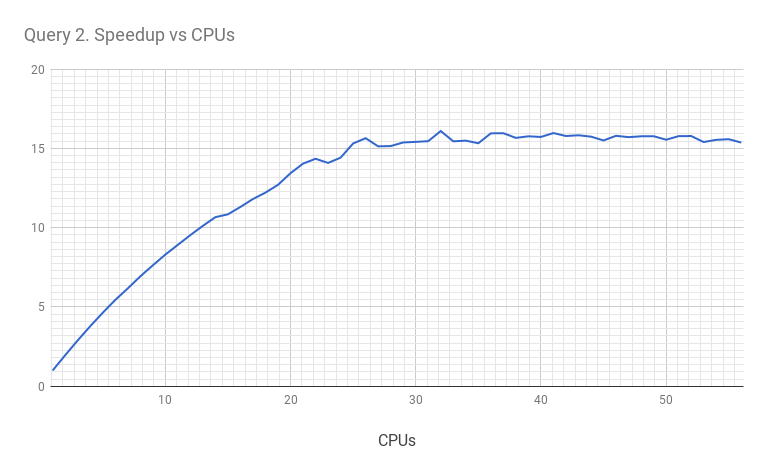 As we suspected, this query allows less parallelism. What about even heavier queries? Let’s consider this one:

In that query, we build a derived table (to resolve the subquery) and I expect it will limit the parallelism even further. And it does: with one CPU the query takes 183.063 sec to execute. With 56 CPUs it takes 28.572 sec. So the speedup is only 6.4 times. 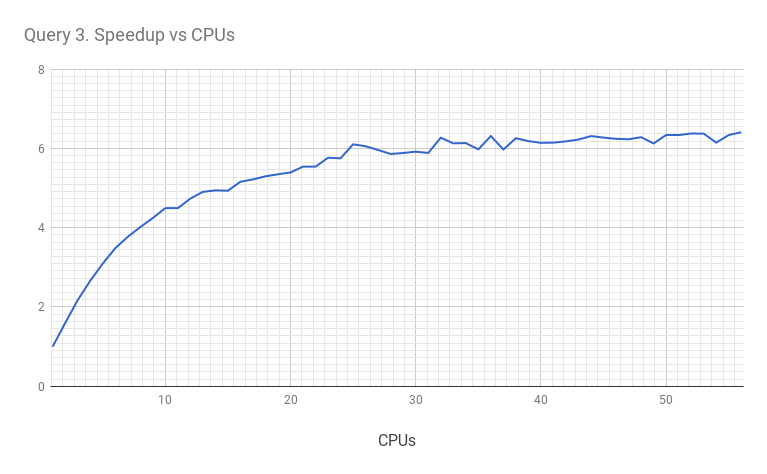 ClickHouse can capably utilize multiple CPU cores available on the server, and query execution is not limited by a single CPU (like in MySQL). The degree of parallelism is defined by the complexity of the query, and in the best case scenario, we see linear scalability with the number of CPU cores. For the scaling on multiple servers you can see my previous post:

However, if query execution is serial, it limits the speedup (as described in Amdahl’s Law).

One example is a 1.5 billion record Apache log, and we can see that ClickHouse can execute complex analytical queries within tens of seconds.