In this blog post, I will run a gh-ost benchmark against the performance of pt-online-schema-change.

When gh-ost came out, I was very excited. As MySQL ROW replication became commonplace, you could use it to track changes instead of triggers. This practice is cleaner and safer compared to Percona Toolkit’s pt-online-schema-change. Since gh-ost doesn’t need triggers, I assumed it would generate lower overhead and work faster. I frequently called it “pt-online-schema-change on steroids” in my talks. Finally, I’ve found some time to check my theoretical claims with some benchmarks.

DISCLAIMER: These benchmarks correspond to one specific ALTER TABLE on the table of one specific structure and hardware configuration. I have not set up a broad set of tests. If you have other results – please comment!

Prepare the table by running:

The table size is about 3GB (completely fitting to innodb_buffer_pool).

Run the benchmark in “full ACID” mode with:

This is important as this workload is heavily commit-bound, and extensively relies on group commit.

This is the pt-online-schema-change command to alter table:

This the gh-ost command to alter table:

For each test the old sysbench table was dropped and a new one prepared. I tested alter table in three different cases:

I measured the alter table completion times for all cases, as well as the overhead generated by the alter (in other words, how much peak throughput is reduced by running alter table through the tools). 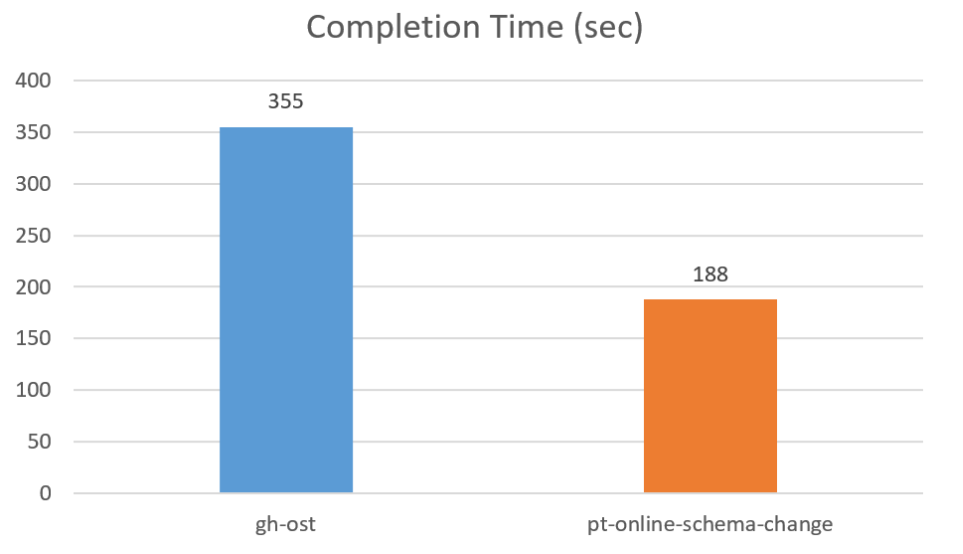 For the Idle Load test, pt-online-schema-change completed nearly twice as fast as gh-ost. This was a big surprise for me. I haven’t looked into the reasons or details yet, though I can see most of the CPU usage for gh-ost is on the MySQL server side. Perhaps the differences relate to the SQL used to perform non-blocking alter tables.

I generated the Light Background Load by running the sysbench command below. It corresponds to a roughly 4% load, as the system can handle some 2500 transactions/sec at this concurrency under full load. Adjust the  --rate value to scale it for your system. 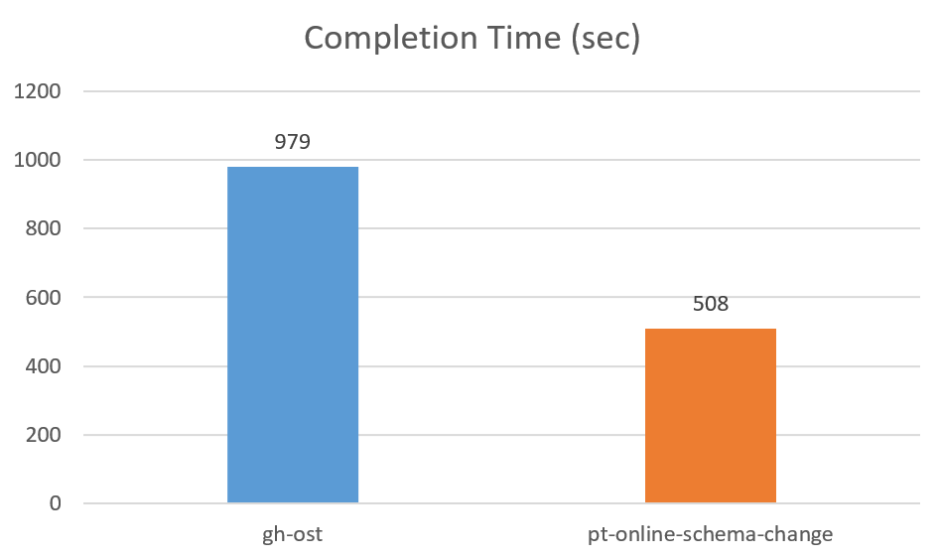 The numbers changed (as expected), but pt-online-schema-change is still approximately twice as fast as gh-ost.

What is really interesting in this case is how a relatively light background load affects the process completion time. It took both pt-online-schema-change and gh-ost about 2.7x times longer to finish!

I generated the Heavy Background Load running the sysbench command below. It corresponds to a roughly 40% load, as the system can handle some 2500 transactions/sec at this concurrency under full load. Adjust --rate value to scale it for your system. 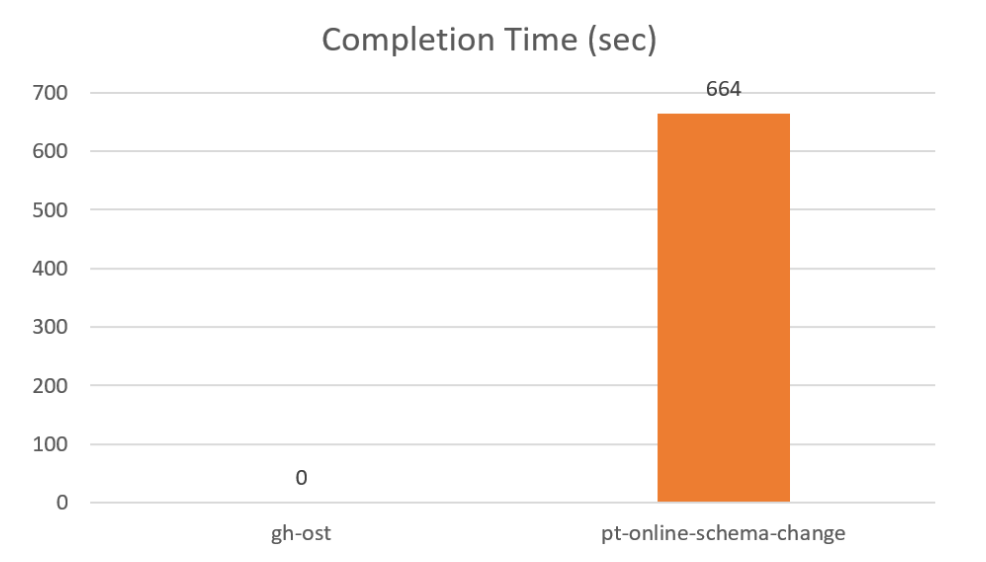 What happened in this case? When the load gets higher, gh-ost can’t keep up with binary log processing, and just never finishes at all. While this may be surprising at first, it makes sense if you think more about how these tools work. pt-online-schema-change uses triggers, and while they have a lot of limitations and overhead they can execute in parallel. gh-ost, on the other hand, processes the binary log in a single thread and might not be able to keep up.

In MySQL 5.6 we didn’t have parallel replication, which applies writes to the same table in parallel. For that version the gh-ost limitation probably isn’t as big a deal, as such a heavy load would also cause replication lag. MySQL 5.7 has parallel replication. This makes it much easier to quickly replicate workloads that are too heavy for gh-ost to handle.

I should note that the workload being simulated in this benchmark is a rather extreme case. The table being altered by gh-ost here is at the same time handling a background load so high it can’t be replicated in a single thread.

Future versions of gh-ost could improve this issue by applying binlog events in parallel, similar to what MySQL replicas do.

An excerpt from the gh-ost log shows how it is totally backed up trying to apply the binary log:

For this test I started the alter table, waited 60 seconds and then ran sysbench at full speed for five minutes. Then I measured how much the performance was impacted by running the tool: 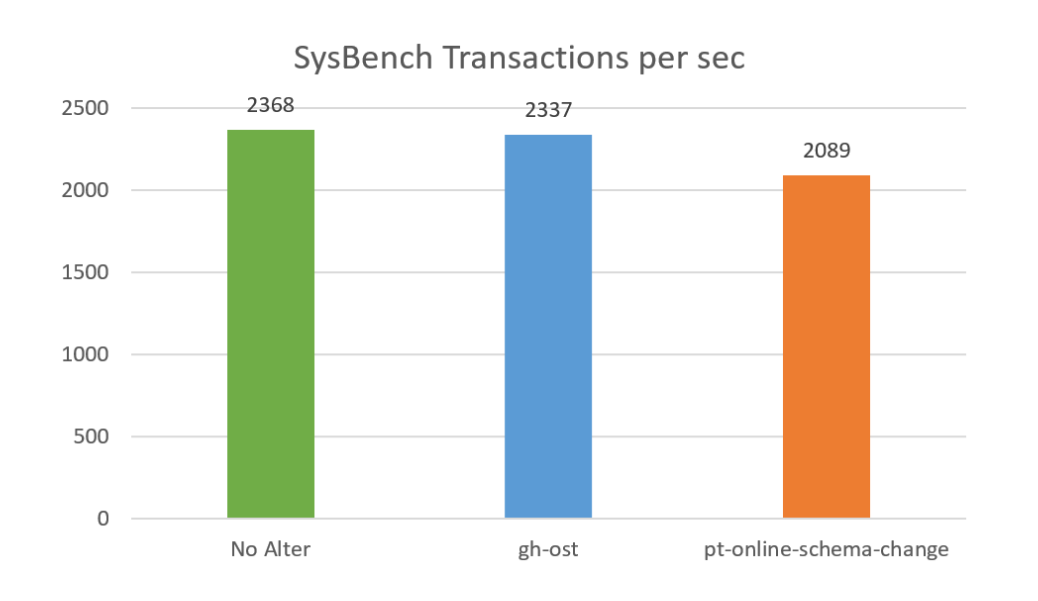 If anything, I was surprised at how little impact the pt-online-schema-change run had on sysbench performance.

It’s important to note that in this case we only measured the overhead for the “copy” stage of the online schema change. Another thing you should worry about is the impact to performance during “table rotation” (which I have not measured).

While gh-ost introduces a number of design advantages, and gives better results in some situation, I wouldn’t call it always superior the tried and true pt-online-schema-change. At least in some cases, pt-online-schema-change offers better performance than gh-ost and completes a schema change when gh-ost is unable to keep up. Consider trying out both tools and see what works best in your situation.