How to improve InnoDB performance by 55% for write-bound loads

Update: do not do this, this has been proven to corrupt data!

During April’s Percona Live MySQL Conference and Expo 2014, I attended a talk on MySQL 5.7 performance an scalability given by Dimitri Kravtchuk, the Oracle MySQL benchmark specialist. He mentioned at some point that the InnoDB double write buffer was a real performance killer. For the ones that don’t know what the innodb double write buffer is, it is a disk buffer were pages are written before being written to the actual data file. Upon restart, pages in the double write buffer are rewritten to their data files if complete. This is to avoid data file corruption with half written pages. I knew it has an impact on performance, on ZFS since it is transactional I always disable it, but I never realized how important the performance impact could be. Back from PLMCE, a friend had dropped home a Dell R320 server, asking me to setup the OS and test it. How best to test a new server than to run benchmarks on it, so here we go!

ZFS is not the only transactional filesystem, ext4, with the option “data=journal”, can also be transactional. So, the question is: is it better to have the InnoDB double write buffer enabled or to use the ext4 transaction log. Also, if this is better, how does it compare with xfs, the filesystem I use to propose but which do not support transactions.

The goal is to stress the double write buffer so the load has to be write intensive. The server has a simple mirror of two 7.2k rpm drives. There is no controller write cache and the drives write caches are disabled. I decided to use the Percona tpcc-mysql benchmark tool and with 200 warehouses, the total dataset size was around 18G, fitting all within the Innodb buffer pool (server has 24GB). Here’re the relevant part of the my.cnf:

So, I generated the dataset for 200 warehouses, added they keys but not the foreign key constraints, loaded all that in the buffer pool with a few queries and dumped the buffer pool. Then, with MySQL stopped, I did a file level backup to a different partition. I used the MySQL 5.6.16 version that comes with Ubuntu 14.04, at the time Percona server was not available for 14.04. Each benchmark followed this procedure:

The tpcc_start I used it the following:

I used 32 connections, let the tool run for 300s of warm up, enough to reach a steady level of dirty pages, and then, I let the benchmark run for one hour, reporting results every minute. 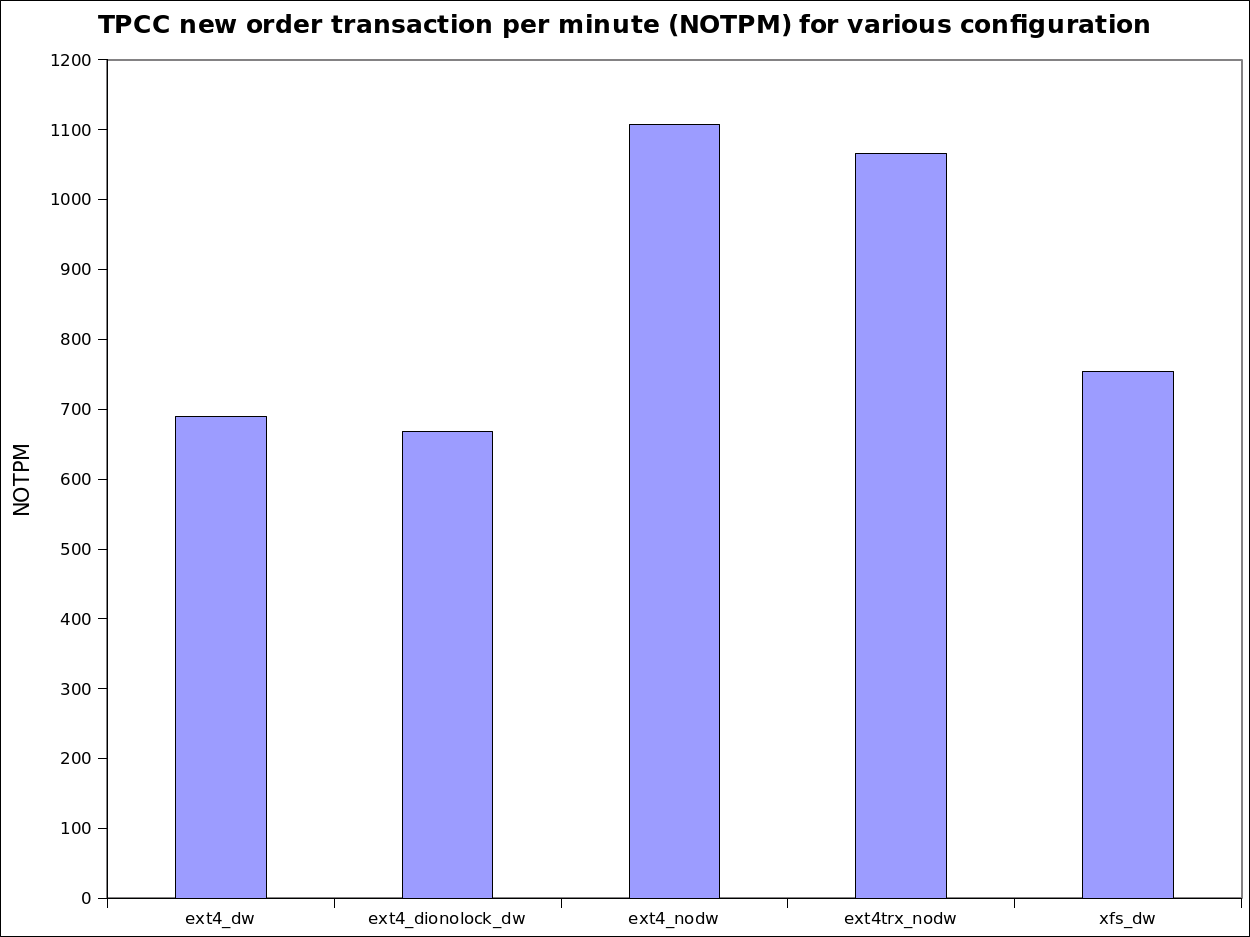 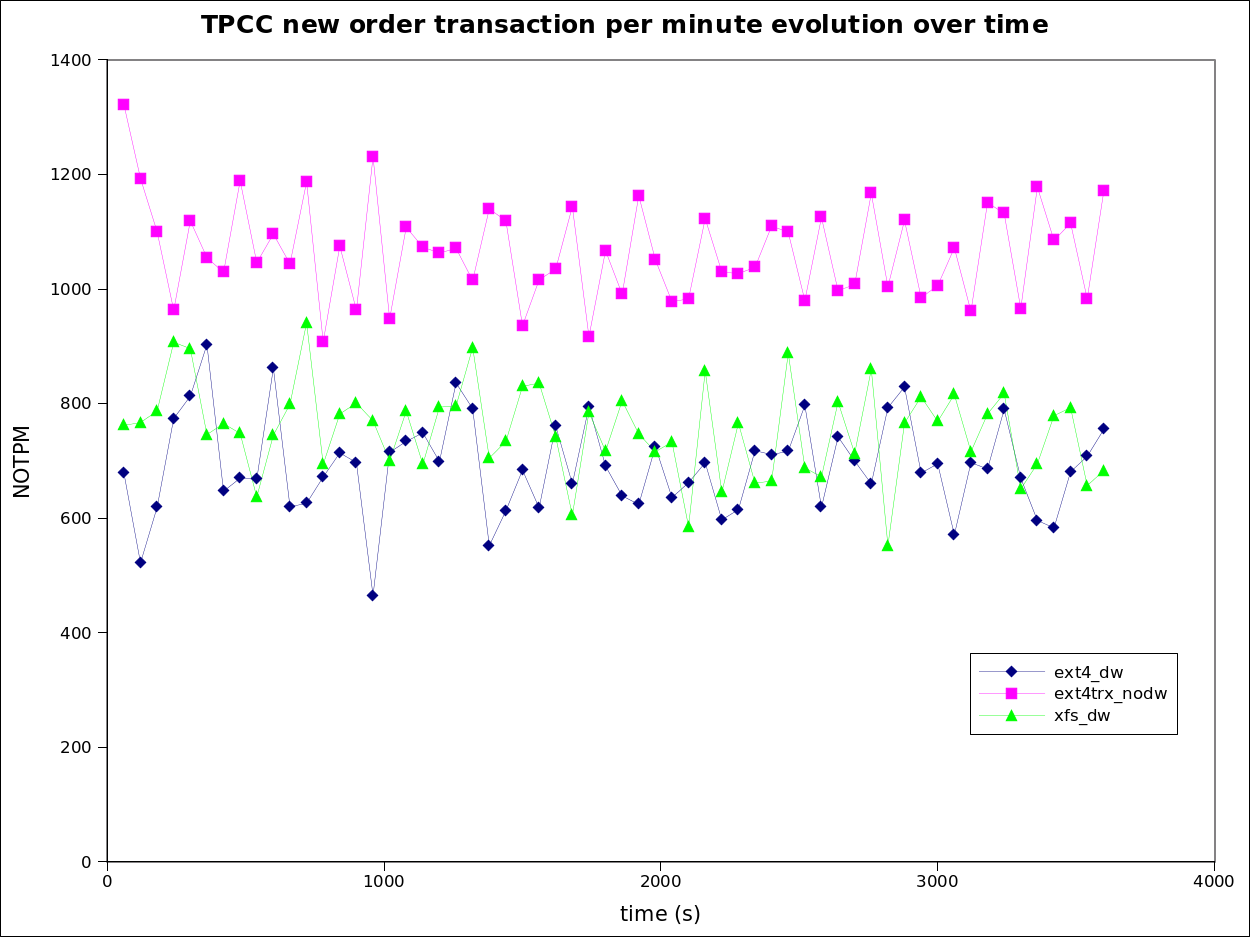 Innodb data corruption is not fun and removing the innodb double write buffer is a bit scary. In order to be sure it is safe, I executed the following procedure ten times:

I observed no corruption. I was still a bit preoccupied, what if the test is wrong? I removed the “data=journal” mount option and did a new run. I got corruption the first time. So given what the procedure I followed and the number of crash tests, I think it is reasonable to assume it is safe to replace the InnoDB double write buffer by the ext4 transactional journal.

I also looked at the kernel ext4 sources and changelog. Up to recently, before kernel 3.2, O_DIRECT wasn’t supported with data=journal and MySQL would have issued a warning in the error log. Now, with recent kernels, O_DIRECT is mapped to O_DSYNC and O_DIRECT is faked, always for data=journal, which is exactly what is needed. Indeed, I tried “innodb_flush_method = O_DSYNC” and found the same results. With older kernels I strongly advise to use the “innodb_flush_method = O_DSYNC” setting to make sure files are opened is a way that will cause them to be transactional for ext4. As always, test thoroughfully, I only tested on Ubuntu 14.04.

Since we are no longer really using O_DIRECT, even if set in my.cnf, the OS file cache will be used for InnoDB data. If the database is only using InnoDB that’s not a big deal but if MyISAM is significantly used, that may cause performance issues since MyISAM relies on the OS file cache so be warned.

If you have a SSD setup that doesn’t offer a transactional file system like the FusionIO directFS, a very interesting setup would be to mix spinning drives and SSDs. For example, let’s suppose we have a mirror of spinning drives handled by a raid controller with a write cache (and a BBU) and an SSD storage on a PCIe card. To reduce the write load to the SSD, we could send the file system journal to the spinning drives using the “journal_path=path” or “journal_dev=devnum” options of ext4. The raid controller write cache would do an awesome job at merging the write operations for the file system journal and the amount of write operations going to the SSD would be cut by half. I don’t have access to such a setup but it seems very promising performance wise.

Like ZFS, ext4 can be transactional and replacing the InnoDB double write buffer with the file system transaction journal yield a 55% increase in performance for write intensive workload. Performance gains are also expected for SSD and mixed spinning/SSD configurations.