InnoDB scalability issues due to tables without primary keys

Each day there is probably work done to improve performance of the InnoDB storage engine and remove bottlenecks and scalability issues. Hence there was another one I wanted to highlight:

Scalability issues due to tables without primary keys

This scalability issue is caused by the usage of tables without primary keys. This issue typically shows itself as contention on the InnoDB dict_sys mutex. Now the dict_sys mutex controls access to the data dictionary. This mutex is used at various places. I will only mention a few of them:

Of course this list is not exhaustive but should give you a good picture of how heavily it is used.

But the thing is when you are mainly debugging contention related to a data dictionary control structure, you start to look off at something that is directly related to data dictionary modifications. You look for execution of CREATE TABLE, DROP TABLE, TRUNCATE TABLE, etc. But what if none of that is actually causing the contention on the dict_sys mutex? Are you aware when generating “row-id” values, for tables without explicit primary keys, or without non-nullable unique keys, dict_sys mutex is acquired. So INSERTs to tables with implicit primary keys is a InnoDB system-wide contention point.

Let’s also take a look at the relevant source code.

Firstly, below is the function that does the row-id allocation which is defined in the file storage/innobase/row/row0ins.cc

Secondly, below is the function that actually generates the row-id which is defined in the file storage/innobase/include/dict0boot.ic

Finally, I would like to share results of a few benchmarks that I conducted in order to show you how this affects performance.

First off all, let me share information about the host that was used in the benchmarks. I will also share the MySQL version and InnoDB configuration used.

The host was a “hi1.4xlarge” Amazon EC2 instance. The instance comes with 16 vCPUs and 60.5GB of memory. The instance storage consists of 2×1024 SSD-backed storage volumes, and the instance is connected to a 10 Gigabit ethernet network. So the IO performance is very decent. I created a RAID 0 array from the 2 instance storage volumes and created XFS filesystem on the resultant software RAID 0 volume. This configuration would allows us to get the best possible IO performance out of the instance.

The MySQL version used was 5.5.34 MySQL Community Server, and the InnoDB configuration looked as follows:

I conducted two different types of benchmarks, and both of them were done by using sysbench.

First one involved benchmarking the performance of single-row INSERTs for tables with and without explicit primary keys. That’s what I would be showing first.

The tables were generated as follows for the benchmark involving tables with primary keys:

This resulted in the following table being created:

While the tables without primary keys were generated as follows:

This resulted in the tables being created with the following structure:

The actual benchmark for the table with primary keys was run as follows:

While the actual benchmark for the table without primary keys was run as follows:

Note that the benchmarks were run with three variations in the number of concurrent threads used by sysbench: 16, 32 and 64.
Below are how the graphs look like for each of these benchmarks. 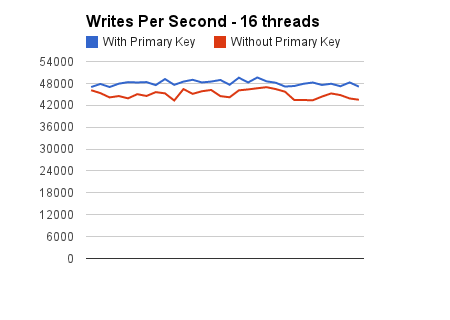 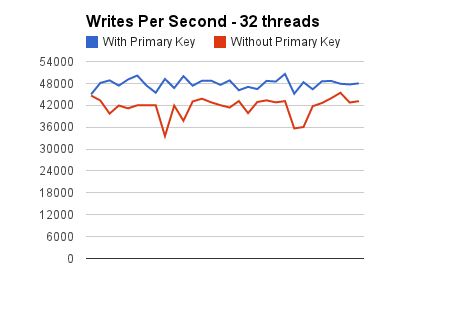 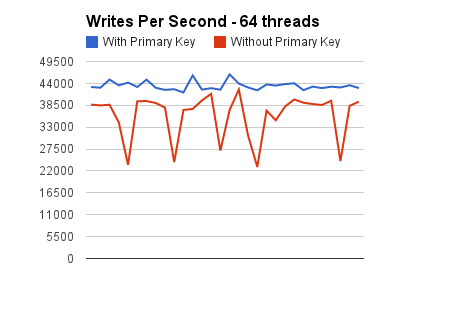 Now let’s take a look at how this impacts the bulk load performance.

The bulk loads to the tables with primary keys were performed as follows:

While the bulk loads to the tables without primary keys were performed as follows:

Note that the benchmarks were again run with three variations in the number of concurrent threads used by sysbench: 16, 32 and 64.
Below is what the picture is portrayed by the graph. 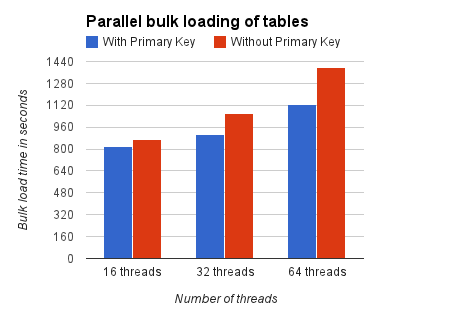