This post is the first of two about how to understand write optimization, what it means for overall performance, and what the difference is between different write-optimized indexing schemes. We’ll be talking about how to deal with workloads that don’t fit in memory—in particular, if we had our data in B-trees, only the internal nodes (perhaps not even all of them) would fit in memory.

As I’ve already said, there is a tradeoff between write and read speed in B-trees. There is also a mathematically optimal tradeoff that’s been proven between data ingestion and query speed, no matter what data structure you have.

But these are not the same tradeoff! B-trees are not even remotely optimal in terms of read/write tradeoff. I’d say this is the most common confusion I run into on this topic. The way it comes up is in the assumption people seem to make that if you are faster than a B-tree at indexing, you must pay a read penalty. This is simply not true, and I intend to convince you, but today I’ll just describe how I think people arrive at this confusion. 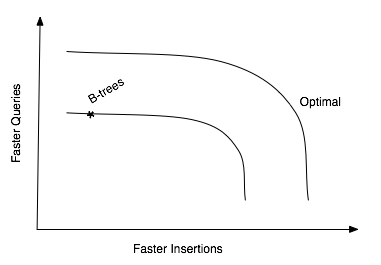 B-trees are not on the optimal insert/query tradeoff curve

What’s the best we can do if we only worry about writes? Or reads? By considering these extreme cases; we can get a feel for the space of all possible solutions.

What’s the most write-optimized structure? Simply log all the data. You ingest data at the bandwidth of the storage system, and you can’t do better than that. The problem is that each query now requires all the data to be examined, and that’s a pretty lousy way to get query performance (unless, of course, you intend to look at it all anyway, like MapReduce does).

At the other extreme, you get maximum read performance by re-sorting the data and laying it out optimally for queries (for each index!) every time new data is inserted. The layout is technical, but can be done, and query performance doesn’t get any better than this. But then insertion speeds are disastrously slow.

For most real workloads, we can’t sacrifice one aspect of performance to benefit another, we need something that works well for both.

A B-tree is one compromise between reads and writes. They’re easy to understand and they’ve been popular for decades, but as the data structure grows, their performance falls to pieces. Heavy use over the years has led to all kinds of refinements, and there are plenty of write optimizations for B-trees we could discuss at length. Here’s a little observation that will help us out: write optimization in B-trees involves maximizing the useful work we accomplish each time we touch a leaf.1

Let’s examine some write optimizations and see how this observation applies. We’ll also see some drawbacks of each technique.

These are pretty common tricks for speeding up B-tree insertions. You may have even tried some of them yourself. Each one has a downside though, and often they’re not obvious in production. Maybe if you didn’t need to insert sequentially for speed, you could simplify your application in a useful way. Or if you thought you could afford more indexes, you’d spend the time to think up cool new ways to analyze your data.

I think the reason people are convinced that B-trees are on the optimal tradeoff curve is pretty simple. Since all of the popular write optimizations are modifications to a B-tree, most people end up stuck on the B-tree tradeoff curve. But contrary to conventional wisdom, it is possible to do a lot better. Next post, I’ll explain why.

1: That’s because we can amortize the cost of the I/O—which is needed by a B-tree for most leaves, when the database is bigger than memory—against the work we are able to complete.