Amazon’s Relational Database Service (RDS) is a cloud-hosted MySQL solution. I’ve had some clients hitting performance limitations on standard EC2 servers with EBS volumes (see SSD versus EBS death match), and one of them wanted to evaluate RDS as a replacement. It is built on the same technologies, but the hardware and networking are supposed to be dedicated to RDS, not shared with the general usage of AWS as you get on normal EC2 servers with EBS.

I benchmarked the largest available RDS instance, which is listed as “High-Memory Quadruple Extra Large DB Instance: 68 GB of memory, 26 ECUs (8 virtual cores with 3.25 ECUs each), 64-bit platform, High I/O Capacity.” I used sysbench’s oltp benchmark, with 400,000,000 rows. This creates a table+index data size approximately twice as big as memory, so the workload should be somewhat IO-bound.

My goal for this benchmark is long-term performance, but as a side project, I thought it would be interesting to measure the single-threaded insert throughput as sysbench ran the “prepare” phase and filled the table with 400 million rows. Here is the chart of rows inserted per minute (click on the image for a bigger view): 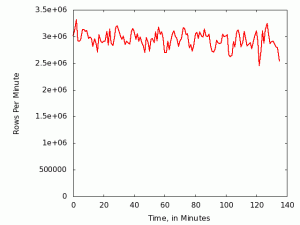 We can deduce a few things from this.

In the next post in this series, we will see how the Amazon RDS instance performed at various thread counts on the OLTP benchmark.

Update Vadim and Peter have rightly pointed out that I shouldn’t have published this result without being able to explain exactly what was happening on the server. I will reproduce this test, capture more measurements about what was going on, and post a follow-up before I continue with the actual sysbench benchmark results.