This is crosspost from https://www.percona.com/blog/.

Disclaimer: The benchmarks were done as part of our consulting practice, but this post is totally independent and fully reflects our opinion.

One of the biggest problems with solid state drives is that write performance may drop significantly with decreasing free space. I wrote about this before (https://www.percona.com/blog/2010/07/17/ssd-free-space-and-write-performance/), using a
FusionIO 320GB Duo card as the example. In that case, when space utilization increased from 100GB to 200GB, the write performance
dropped 2.6 times.

In this regard, Virident claims that tachIOn cards provide “Sustained, predictable random IOPS â€“ Best in the Industry”. Virident generously provided me model 400GB, and I ran the benchmark using the
same methodology as in my experiment with FusionIO, which was stripped for performance. Also using my script, Virident made runs on tachIOn 200GB and 800GB model cards and shared numbers with me ( to be clear I can certify only numbers for 400GB card, but I do not have reasons to question the numbers for 200GB and 800GB, as they corresponding to my results). 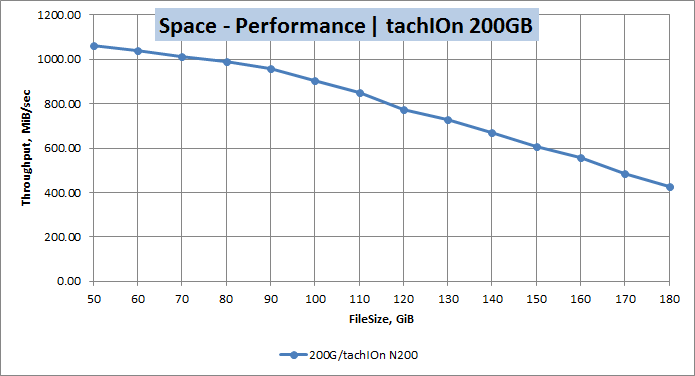 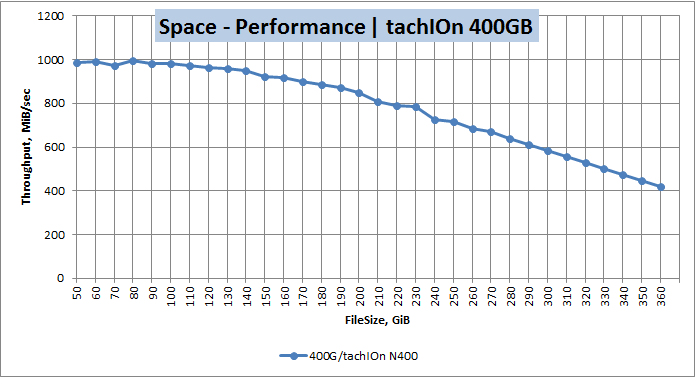 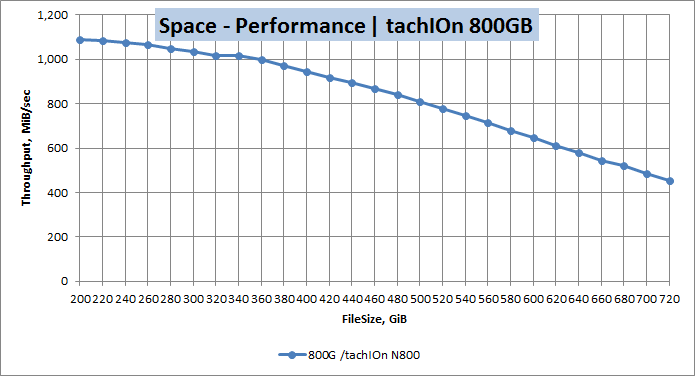 Visually, the drop is not as drastic as it was in the case using FusionIO, but let’s get some numbers.
I am going to take the performance numbers at the points where the available space of the card is 1/3, 1/2, and 2/3 filled, as well as at the point where the card is full. Then I will compute the ratio of each of those IOS numbers to the IOS at the 1/3 point.

Observations from looking at the graph:

* You can also see the card never goes below 400MB/sec, even when working at full capacity. This characteristic (i.e., high throughput at full capacity) is very important to know if you are looking to use an SSD card as a cache layer (say, with FlashCache), as, usually for caching, you will try to fill all available space.
* The ratio between the 1/3 capacity point and full capacity point is much smaller compared with FusionIO Duo (without additional spare capacity reservation).
* Also, looking at the graphs for Virident and comparing with the graphs for FusionIO, one might be tempted to say that Virident just has a lot of space reserved internally which is not exposed to the end user, and this is what they use to guarantee a high level of performance. I checked with Virident and they tell me that this is not the case. Actually from diagnostic info on Wiki page you can see: tachIOn0: 0x8000000000 bytes (512 GB), which I assume total installed memory. Regardless, it is not a point to worry about. For pricing, Virident defines GB as the capacity available for end users. So, a competitive $/GB level is maintained, and it does not matter how much space is reserved internally.

Now it would be interesting to compare results with results for FusionIO. As cards have different capacity I made graph which shows
throughput vs percentage of used capacity for both cards, FusionIO 320GB Duo SLC and Virident 400GB SLC 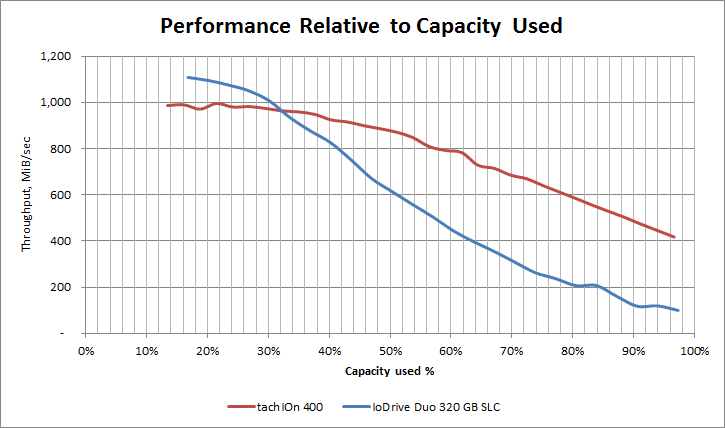 In conclusion:
* On single Virident card I see random write throughput close or over 1GB/sec in with low space usage and it is comparable with throughput I’ve got on stripped FusionIO card. I assume Virident maintain good level of parallelism internally.
* Virident card maintains very good throughput level in close to full capacity mode, and that means you do not need to worry ( or worry less) about space reservation or formatting card with less space.