Redis Benchmarks on FusionIO (Round 1)

Peter took a look at Redis some time ago; and now, with the impending 1.2 release and a slew of new features, I thought it time to look again.

One of the more interesting features in 1.2 is the ability to operate in “append-only file persistence mode”, meaning Redis has graduated from a semi-persistent to a fully-persistent system! Using the redis-benchmark script included, I ran the following command

(By default, redis-benchmark invokes 50 parallel clients, with a keep alive of 1, using a 3-byte payload.) 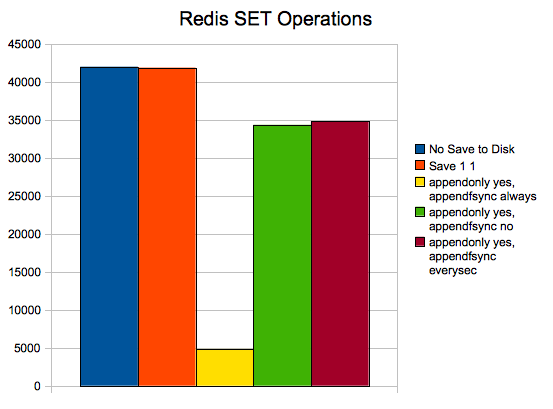 I am quite surprised at the performance penalty here for full durability.

Aside from the numbers, there are a couple of other interesting things I noticed during the benchmarking (note that the full benchmark suite was run, not just SET):

– In case 2, the dump.rdb file was 40k. While in case 3, 4, and 5, appendonly.aof was 1.9M. If you’re going to to use appendonly in production, be sure to consider the additional storage requirements.
– In every case where appendonly was enabled, I received the following error many times as the test was completing (note that this did not occur during the SET operations):

Ryan was a principal consultant and team manager at Percona until July 2014. He has experience with many database technologies in industries such as health care, telecommunications, and social networking.