I mentioned earlier that IO scheduler CFQ coming by default in RedHat / CentOS 5.x may be not so good for MySQL. And yesterday one customer reported that just changing cfq to noop solved their InnoDB IO problems. I ran tpcc scripts against XtraDB on our Dell PowerEdge R900 server (16 cores, 8 disks in RAID10, controller Perc/6i with BBU) to compare cfq, deadline, noop and anticipatory (last one just to get number, I did not expect a lot from anticipatory).

Here is result (in transactions per minute, more is better): 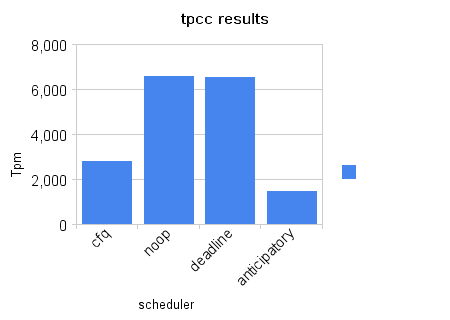 As you see noop / deadline can utilize disks much better.

For reference I used tpcc scripts from https://launchpad.net/perconatools, generated 100W (about 9.5GB of data on disk), and used next XtraDB params: