Replay the Execution of MySQL With RR (Record and Replay) 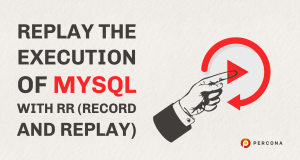 Chasing bugs can be a tedious task, and multi-threaded software doesn’t make it any easier. Threads will be scheduled at different times, instructions will not have deterministic results, and in order for one to reproduce a particular issue, it might require the exact same threads, doing the exact same work, at the exact same time. As you can imagine, this is not straightforward.

Let’s say your database is crashing or even having a transient stall.  By the time you get to it, the crash has happened and you are stuck restoring service quickly and doing after-the-fact forensics.  Wouldn’t it be nice to replay the work from right before or during the crash and see exactly what was happening?

To demonstrate how powerful the tool is, we will be walking through how we used it to narrow down the issue from PXB-2180 (Special thanks to Satya Bodapati, who helped with all the InnoDB internals research for this bug).

The stack trace was also not always the same. It was crashing on different parts of InnoDB, but here we had one commonality from all crashes – it always happened while trying to apply a redo log record to the same block page and space id:

The main goal at this step is to prove and identify where the page layout has diverted.

With this information, we ran MySQL under RR and reran the backup until we saw the same issue at prepare. We can now replay the MySQL execution and check how it compares. Our idea is to:

Before we progress further, let’s explain a few things:

To start, let’s read what LSN we have on mysql.ibd for page five before the backup. We will be using od (check man od for more information) and the information explained above:

And check if it matches an LSN stamp from mysqld. For that we will add a conditional breakpoint on the replay execution of MySQL at function buf_flush_note_modification:

We can see the LSN stamp from before the preparation of full backup and the first stamp from the replay session match. Time to prepare the backup, advance the replay execution, and recheck:

Same LSN stamp on both, server and backup. Time to move on and start to apply the incrementals: