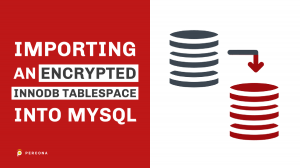 Below I am sharing my current setup and the requirements.

The following steps will be helpful to understand the process involved.

Step 1 (Prepare the table to copy):

This step ensures that changes to that particular table have been flushed to disk so that binary table copies can be made while the server is running.

Once the command is executed, it will create two additional files (.cfg and .cfp) in the MySQL data directory.

After executing step one, you need to copy the table files (.ib,.cfg,.cfp) to destination server s2.

Once the table files are copied to the destination server (s2), you need to unlock the table on s1 to allow the operations.

Now, you have to create the empty table on the destination server s2.

Make sure that you have added the encryption on the table structure “ENCRYPTION=Y”. Otherwise, you will get the following error during the import process.

Once the empty table has been created on s2, it will have two files (.frm and .ibd). You need to remove the .ibd file so that you can import the tablespace which was copied from s1.

In this step, you need to copy the tablespace files (from s1) to the data directory under the database folder.