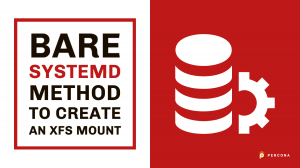 For MongoDB data directories only XFS is recommended. The ext4 filesystem isn’t so bad but when there are a very, very high number of random accesses (which WiredTiger can reach) it can hit a bottleneck. To be fair most deployments will never hit this bottleneck, but it does remain an official production recommendation of MongoDB to only use XFS, and you get annoying warnings until you do.

On a fresh cloud server instance for your MongoDB hosts, it would be helpful if they always booted up with a flexibly-attached XFS mount for a MongoDB data directory. Your cloud service possibly isn’t making this easy though. E.g. you can get a fresh, network-attached block device on demand with each new virtual server instance but there is no “xfs” option available in that template configuration.

If you script or configure something at the cloud service API level (eg. launch using AWS CLI scripts in AWS EC2, or use cloud-init for a multi-vendor way) this is achievable. But let’s assume you have some one-time testing, or something like that, where the time investment for a cloud service script/recipe won’t pay off.

The Ideal Method – Which Doesn’t Work Yet

Ideally, you would create a system mount unit, specify the filesystem type, and systemd would take care of formatting a freshly-attached block device if the filesystem wasn’t initialized yet.

But this is not supported so far (systemd github issue #10014). I’ve not been able to make the ‘x-systemd.makefs’ expansion feature added around systemd-fstab-generator work in AWS Linux 2 instances either.

I assume you’re in the same situation if you’ve landed here.

Bare systemd Units to Do it All

One systemd unit is required for each of these steps: mkfs.xfs, mount, and chown mongod:mongod. The key points are:

(!) Don’t forget to first create the /data directory in your server image’s root filesystem to be the mount point for the data.mount unit.

As you’re building a server image at this stage you don’t have to start the units above – just enable, then save the server image. Yes of course it should be tested, but the real goal is making it work in new server instances. So, confirm these systemd units are automatically executed after the startup of those.

The Output in systemd Journal

When a new server instance is started, the journal messages for these three units should look something like this:

Or, if after Reboot:

Note that mkfs.xfs failing and being ignored in the second or later restarts is planned and expected given the way this systemd service unit was written.

Or, if after Reboot:

systemd unit types and activation rules are tightly coupled with core Linux. You can use them to do the right thing, at the right time.

A server setup job that can be reduced to single commands such as /usr/bin/mkdir, /usr/sbin/mkfs*, /usr/bin/chown etc. is an opportunity for you to implement a minimalist systemd config project.

Scripts with systemd are fine too – make them the command that is run by ExecStart=… – but that’s a different feeling to being able to see everything with just “systemctl cat <unit_name>” and “systemctl status”.

Typically systemd units will be run every bootup, not just the first one. A command such as mkfs.xfs should be only run once, however, so a trick is needed. This example relied on the fact that mkfs.xfs will not damage an existing filesystem (without -f force at least). Putting “-” at the start of /usr/sbin/mkfs.xfs is how the ‘filesystem already exists’ exit code is ignored.