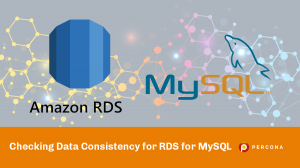 MySQL for RDS and DBaaS, in general, are very controlled environments by the vendors, meaning that there are missing things like a SUPER grant for the root user (and any user in general). This has some implications on operations, one of them being the impossibility of running pt-table-checksum to verify data consistency between a primary and its replicas.

However, there’s a workaround that might overcome this situation and involves three things:

The problem with RDS is that you cannot change binlog_format to STATEMENT, which is one of the requirements for pt-table-checksum to run.

The workaround consists of capturing the executed queries and replay it them in the replica. There are several ways to collect the queries: one can be using the Performance Schema in a similar way as explained in this blog post (https://www.percona.com/blog/2015/10/01/capture-database-traffic-using-performance-schema/). Another one is just using the slow log with long_query_time = 0. By default on RDS the log output is set to TABLE so with a simple query against mysql.slow_log you can get the queries. Another option that we prefer to avoid is to use pt-query-digest processlist feature since it might lose capturing some queries.

The next step is to send those queries to the replicas as soon as possible so we can somehow guarantee that the point in time for comparison is the same for tables on both primary and secondary. And that’s the reason why one needs to change the read-only value in the replicas to 0. A change that can be rollbacked immediately after the pt-table-checksum process ends.

The Proof of Concept

I have created an RDS primary/secondary environment and have added a table with inconsistency on purpose.

Can you spot the difference :)? It’s the last row. While on the Primary the string_field says “pepe” in the replica it says “papa”.

So are we ready to run pt-table-checksum? Not quite. The tool will complain about not being able to change the binlog_format and it will end the execution. Unfortunately, currently, there’s no way to avoid that other than modifying the code. The change is to add a return to the following conditional:

Now we are ready! Let’s see if we can find out that difference using the tools. To send the queries to the replicas, execute the queries previously captured.

And finally, the actual pt-table-checksum command:

The output won’t report any difference and is expected to happen like that, so don’t panic. So, how do we check the reality? By querying the checksums table in the replica: