Why is MongoDB’s SSPL Bad For You?

If you read the MongoDB SSPL FAQ it doesn’t sound like too big of a deal, unless you’re a “big, nasty cloud vendor.” 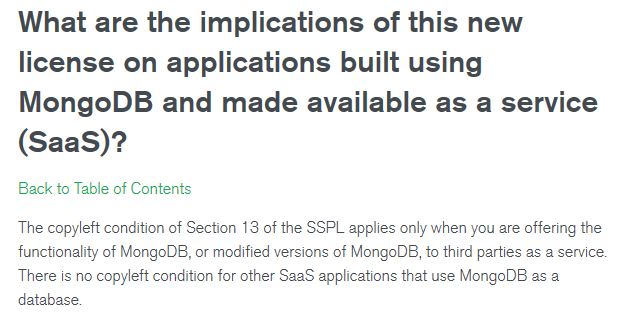 But, I’ve got news for you — the implications for you are much deeper and worse than you might think from reading the FAQ!

MongoDB has always been a “reluctant open source company”. While the world was moving away from copy-left licenses (GPL) to permissive ones (MIT, BSD, Apache), MongoDB chose AGPL, an even more restrictive version of the GPL license for their MongoDB Server Software.

If you read MongoDB’s S1 form used for their IPO filing you will see the emphasis is on the “freemium” model. This is achieved by crippling the Community Server version, rather than giving support to Open Source community values.

In his 2019 interview, MongoDB CEO Dev Ittycheria confirms that MongoDB Inc. does not care about working with the open source community to make MongoDB better, as their focus is on their freemium strategy:

“MongoDB was built by MongoDB. There was no prior art. We didn’t open source it for help; we open-sourced it as a freemium strategy,” Dev Ittycheria, MongoDB CEO.

In October 2018, MongoDB changed its license to SSPL (Server Side Public License). This was done abruptly, rather than the more open source community-friendly way, where forthcoming license changes are announced with reasonable notice, allowing those who can’t use the new license for any reason to plan and execute transitioning.

What is SSPL Really About and Why Does it Affect You?

SSPL requires anyone who wants to offer MongoDB as a DBaaS to either release all surrounding infrastructure as SSPL or get a commercial license from MongoDB. The first is impractical for cloud vendors as licensing MongoDB directly allows MongoDB Inc. to exercise significant control over end-user pricing, meaning there is no true competition.

With DBaaS becoming the leading form of database software consumption, this vendor lock-in is quite an issue!

You may think, “it’s not a big deal — MongoDB Atlas is not THAT expensive.” Indeed, that may be the case…. for now.

MongoDB is NOT profitable yet, having posted a more than $175 million loss last year. For now, MongoDB invests actively in growth. This means, among other things, maintaining reasonably low prices… but modern world companies need to become profitable sooner or later, and with a lack of competition, you will be paying for that!

It is not just profitability that you need to worry about. The general “winner takes all” playbook, which prescribes to get the dominant market share at any cost includes raising prices until it hurts (and beyond)!

In the database space, this game was played very well decades ago by Oracle, who were saving folks from hardware lock-in with Big Blue (IBM). Oracle software was available on a variety of hardware and was initially reasonably priced… only to become the bane of CIOs and CFOs existence around the world.

MongoDB is playing the same game but at a much-accelerated rate. My friend and colleague Matt Yonkovit recently asked Is MongoDB the New Oracle? and I’m quite sure, at least from this standpoint, that it is.

In conclusion, SSPL is not something that impacts just a handful of cloud vendors who can’t directly compete with MongoDB in the DBaaS space. It affects all MongoDB users by imposing vendor lock-in, and the risk of excessively high prices in the future.

Check out Peter’s post Why SSPL is Bad For You, Part 2 for even more about this topic!