ClickHouse and MySQL – Better Together 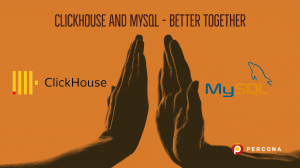 It’s been a while since I wrote about ClickHouse, there are a lot of new features that are worth mentioning, and for this, I recommend to follow the Altinity Blog but today I want to look at the improved integration of ClickHouse and MySQL.

There are two features:

By enabling MySQL protocol in ClickHouse server, you will allow for the MySQL command line tool or applications that typically connect to MySQL to connect to ClickHouse and execute queries.

With this, keep in mind:

How do you enable MySQL protocol? Actually it is easy, you add to config:

And after a ClickHouse restart you can connect with mysql command line:

And after that, we can work as we usually work from MySQL command line. Some examples with ontime databases:

And now we can run some analytical queries, e.g., what ten airports had the most departures for the given time frame:

And what the most popular routes are:

Well, I can do this all day long, but let me just show the last query which highlights the difference in syntax.

Assume we want to get the data from the previous query but per year (ten most popular routes per year). The most elegant solution to get this is to use WINDOW functions, which are supported in MySQL 8 but not yet supported in ClickHouse. However, ClickHouse has a workaround for this one special case. We can get the result we need using the LIMIT BY extension (not to be confused with LIMIT).

For ClickHouse we write: