Ever Heard of Postgres? 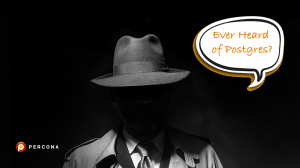 Hello! My name is Robert and I am a PostgreSQL Consultant at Percona. I’ve been here since the summer of 2019 but things have been so busy that this is the first chance I’ve had to write.

For my first blog, I’d like to write about … you. Or, more to the point, why you are so interested in PostgreSQL, and why there’s this crazy excitement for something that’s been around longer than some people have been alive.

Think about it – Postgres started out as a project at University of California Berkeley long before the birth of the Linux kernel and it was only open-sourced the same year that a certain OS with the digits “95” in its name first came out in the last century.

So Why This Seemingly Sudden Popularity?

Could there be a super-PAC funded by some secret billionaire? Is there a press cabal that only talks about Postgres?

Let’s start figuring this out by coming to an agreement on some key facts:

Over the years I’ve sometimes come across Postgres data-clusters that people had forgotten even existed, working faultlessly in the performance of some critical task.  The adjective “useful” is never far away when Postgres is spoken aloud.

The fact of the matter is, everybody in the industry knows about Postgres. Heck, it’s been around long enough! So what makes it so hot today after being around for so many years?

Let me tell you about the Technology Adoption Life Cycle. Every modern technology that has gained mass adoption always begins with the developers and their early adopters. Over the course of years, the continued support and trust earned from these people percolate up the corporate, management ladder until the decision-makers, with the big budgets, are convinced to make substantial commitments using that technology.

Under ordinary circumstances, the Technology Adoption Life Cycle is, although slow, about as relentless and as dependable a predictor as knowing that the sun rises from the east and sets in the west. Well, that didn’t happen with PostgreSQL. Corporate adoption in many places has accelerated much faster, sometimes in just months. Why? Because it’s the world that’s changed and not the technology. It might be that rather than looking for something new and fantastic overcoming a critical problem that traditional solutions can no longer resolve, people recognize that today’s solutions are an exercise of searching for a technology that solves a new variation of an old problem. The work is no longer in the realm of CREATION so much as it is now the mechanics of IMPLEMENTATION.

It Does The Job

For what it’s worth, I think what’s happened is that our latest generation of developers who don’t have any preconception, bias, or history with any particular technology learn to love Postgres because it just does the job, nothing more. The traditional challenge of pushing and convincing the decision-makers, unlike other technologies, hasn’t occurred because the boss already knows about it. This is unlike many other good solutions that have followed the normal adoption life cycle. The decision transitioning to Postgres has been rapid for the obvious reason that nobody has to be convinced of its capabilities.

I hope you enjoyed what I had to say and will find it at least a little helpful in your day-to-day life. And if you still have doubts where Postgres sits in your stack here’s an easy test; ask your boss “Have you ever heard of Postgres?”

Our white paper looks at the features and benefits of PostgreSQL and presents some practical usage examples. We also examine how PostgreSQL can be useful for companies looking to migrate from Oracle.