2019 Database Year in Review: The Revenge of the Cloud 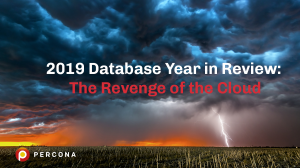 The year is almost over and it’s time to recap the biggest stories in our industry over the past twelve months and how they might impact us in the coming year.

When we look back at 2019, we can summarize that it was the year the “Cloud Wars” was felt in full force. The cloud has disrupted not only IT operations but enterprise software companies and how they sell their products. In the database industry, cloud providers have sought to commoditize databases, a trend that has put pressure on vendors worldwide. In response, database vendors have taken a negative approach to cloud providers and sought to change their licensing — or launch competing DBaaS offerings of their own.

These changes have led to confusion in the marketplace. Most users are just starting to understand rules around licensing such as Server Side Public License (SSPL), and survey results show that users are 2.5 times less likely to choose a modified open source database license then a permissive one.

2019: Licensing Changes and Concerns Are on the Rise

Percona’s Open Source Data Management Software Survey also showed that DBaaS continues to grow. Its ease of use and low barrier of entry is appealing to many companies, leading many classic database vendors to launch their own DBaaS offerings.

All is Not Perfect in the Cloud

The growth of the cloud, however, has not been all smooth. In 2019 we have seen the massive impact that cloud outages can have on business. All major cloud providers had multiple outages this year, impacting many large websites and enterprises. Two things have made the impact of the outage worse.

First, as we lower the barrier of entry for cloud services, more people who have only cursory knowledge of how to architect, setup, and configure their databases in the cloud are becoming the “admin” in charge of ensuring they are good for production.

Second, many cloud providers insist on using the term “Fully Managed” when referring to their services — a loosely used marketing term that can often mislead users. When something is fully managed, most people assume that they don’t have to worry about it at all, and for the most part, almost all cloud services can be used out-of-the-box in just a few minutes. However, the security and availability of your applications is a shared responsibility resulting in applications that are not configured to survive major outages.

Unfortunately, we have also seen a lack of technical know-how (and blind trust) lead to massive increases in database and data breaches in the past year. Thousands of large databases have been left unprotected, leading to billions of people’s personal data being leaked.

MongoDB and Elasticsearch seem to be the most prone to leaving data open, but they are far from the only databases with issues. Data has also been leaked by uploading unencrypted and unsecured database backups to cloud servers.

Just a Sampling of 2019 Data Leaks

There is also a technology inheritance problem within modern enterprises. Developers are the kingmakers — choosing tech stacks and databases. This forces DBA’s and sysadmins to have to adapt to various tools, databases, and technologies — with multiple toolsets, APIs, and processes to maintain. In a recent poll, only 22% of DBA’s are involved in deciding which databases are used by applications, while architects and developers make the decisions on which database to use more than 50% of the time.

Multi-Cloud as a Strategy

Outages and the need to adapt to expanding demands, has contributed to the growing trend of deploying a multi-cloud and hybrid strategy. We see an increasing number of companies running “Cloud Native” applications designed to be run in any cloud, on any platform, with one or more databases.

Cloud providers have recognized this, with the major providers announcing big pushes into the hybrid or multi-cloud space: Google with Anthos, AWS with Outposts, and Microsoft Azure with ARC. These moves are matching IBM’s Redhat purchase as well as the large investments being made in OpenShift as a hybrid/multi-cloud play with Kubernetes.

This year we have also been witnessing a massive growth in companies’ willingness to not only run multi-cloud/multi-location but also multi-database.

PostreSQL is the fastest-growing enterprise database:

Number of Database Instances In Production

Determining what database software is right for your application, customer experience, and enterprise goals has become a very complicated process with thousands of database server instances, multiple hosting locations on-prem and multi-cloud, and key technology standards that have to be determined. But, in the end, it comes down to simply finding the best tool for the job.

Learn how Percona can help you navigate this new multi-database world and maximize the performance of your database today.

Databases used to be so simple. Get database software, install the software on a server, connect it with applications, populate it with data.

With the rise of the internet and internet business, data has become one of the biggest commodities and assets for doing business and the key to meeting business goals. Download our white paper Non-Simple: The New Complexity of Database Deployment, which discusses this new complexity and how you can begin to make sense of it.