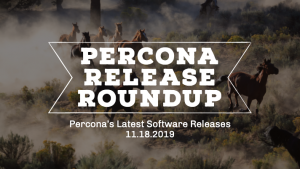 As mentioned a few weeks ago, we are now publishing release roundups comprising all the details and information you need on the previous week (or two)’s releases from Percona. This post will encompass releases from November 4, 2019 – November 18, 2019.

Each roundup will showcase the latest in software updates, tools, and features to help you manage and deploy our software, with highlights and critical information, as well as links to the full release notes and direct links to the software or service itself.

On November 6, 2019, we released Percona Server for MySQL version 5.6.46-86.2, the current GA release in the 5.6 series. It includes several bug fixes, including a fix of the Audit log filtering by a user not working and the addition of a package version for the Red Hat Package Manager (rpm). Percona Server for MySQL is an enhanced drop-in replacement for MySQL.

PMM 2.1.0, a free and open-source platform for managing and monitoring MySQL, MongoDB, and PostgreSQL performance, was released on November 11, 2019. This version has bug fixes and many new features, including a latency detail graph, additional log and config files, and the disabling of heavy-load collectors automatically when there are too many tables.

NOTE: Percona Monitoring and Management (PMM) employs a client/server model. You must download and install both the client and server applications. The directions for doing this are in the documentation.

On November 13, 2019, we released Percona Server for MongoDB version 4.2.1-1, which includes all of the new features of the latest version of MongoDB 4.2 Community Edition, as well as the Percona Memory Engine storage engine, encrypted WiredTiger storage engine, and enhanced query profiling.  Percona Server for MongoDB 4.2.1-1 adds the ability for remote streaming hot backups to Amazon S3 or compatible storage such as MinIO, and is now included in all our active MongoDB releases (3.6, 4.0, and 4.2).