PostgreSQL is one of the finest object-relational databases, and its architecture is process-based instead of thread-based. While almost all the current database systems utilize threads for parallelism, PostgreSQL’s process-based architecture was implemented prior to POSIX threads. PostgreSQL launches a process “postmaster” on startup, and after that spans new process whenever a new client connects to the PostgreSQL.

Before version 10 there was no parallelism in a single connection. It is true that multiple queries from the different clients can have parallelism because of process architecture, but they couldn’t gain any performance benefit from one another. In other words, a single query runs serially and did not have parallelism. This is a huge limitation because a single query cannot utilize the multi-core. Parallelism in PostgreSQL was introduced from version 9.6. Parallelism, in a sense, is where a single process can have multiple threads to query the system and utilize the multicore in a system. This gives PostgreSQL intra-query parallelism.

Parallelism in PostgreSQL was implemented as part of multiple features which cover sequential scans, aggregates, and joins.

Components of Parallelism in PostgreSQL

There are three important components of parallelism in PostgreSQL. These are the process itself, gather, and workers. Without parallelism the process itself handles all the data, however, when planner decides that a query or part of it can be parallelized, it adds a Gather node within the parallelizable portion of the plan and makes a gather root node of that subtree.  Query execution starts at the process (leader) level and all the serial parts of the plan are run by the leader. However, if parallelism is enabled and permissible for any part (or whole) of the query, then gather node with a set of workers is allocated for it. Workers are the threads that run in parallel with part of the tree (partial-plan) that needs to be parallelized. The relation’s blocks are divided amongst threads such that the relation remains sequential. The number of threads is governed by settings as set in PostgreSQL’s configuration file. The workers coordinate/communicate using shared memory, and once workers have completed their work, the results are passed on to the leader for accumulation. 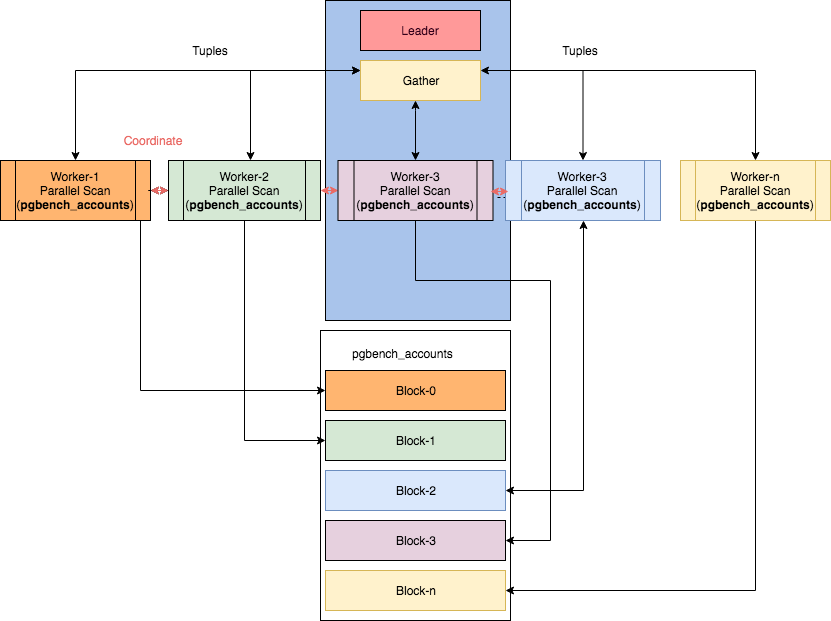 In PostgreSQL 9.6, support for the parallel sequential scan was added. A sequential scan is a scan on a table in which a sequence of blocks is evaluated one after the other. This, by its very nature, allows parallelism. So this was a natural candidate for the first implementation of parallelism. In this, the whole table is sequentially scanned in multiple worker threads. Here is the simple query where we query the pgbench_accounts table rows (63165) which has 1500000000 tuples. The total execution time is 4343080ms. As there is no index defined, the sequential scan is used. The whole table is scanned in a single process with no thread. Therefore the single core of CPU is used regardless of how many cores are available.

What if these 1,500,000,000 rows scanned parallel using “10” workers within a process? It will reduce the execution time drastically.

Query used for the Benchmark:  SELECT * FROM pgbench_accounts WHERE abalance > 0;

The above graph clearly shows how parallelism improves performance for a sequential scan. When a single worker is added, the performance understandably degrades as no parallelism is gained, but the creation of an additional gather node and a single work adds overhead. However, with more than one worker thread, the performance improves significantly. Also, it is important to note that performance doesn’t increase in a linear or exponential fashion. It improves gradually until the addition of more workers will not give any performance boost; sort of like approaching a horizontal asymptote. This benchmark was performed on a 64-core machine, and it is clear that having more than 10 workers will not give any significant performance boost.

Following is an example of a plan when an aggregate is to be evaluated in parallel.  You can clearly see performance improvement here.

Query used for the Benchmark:  SELECT count(*) FROM pgbench_accounts WHERE abalance > 0;

The parallel support for B-Tree index means index pages are scanned in parallel. The B-Tree index is one of the most used indexes in PostgreSQL. In a parallel version of B-Tree, a worker scans the B-Tree and when it reaches its leaf node, it then scans the block and triggers the blocked waiting worker to scan the next block.

Confused? Let’s look at an example of this. Suppose we have a table foo with id and name columns, with 18 rows of data. We create an index on the id column of table foo. A system column CTID is attached with each row of table which identifies the physical location of the row. There are two values in the CTID column: the block number and the offset.

Let’s create the B-Tree index on that table’s id column.