With such a wide range of options available for running MySQL based servers in Amazon cloud environments, how do you choose? There’s no doubt it’s a challenge. In this two-part series of blog posts, we’ll try to draw a fair and informative comparison based on well-established benchmark scenarios – at scale.

In part one we will discuss the performance of the current Amazon RDS services – Amazon Aurora and Amazon RDS for MySQL – and compare it with the performance of Percona Server with InnoDB and RocksDB engines. And in part two we will go over costs and efficiencies to look for. All this information is necessarily number-heavy, but hopefully, you’ll enjoy the experiments!

For these evaluations, we use the sysbench/tpcc LUA test with a scale factor of 500 warehouses/10 tables. This is the equivalent of 5000 warehouses of the official TPC-C benchmark.

These are the AWS MySQL environments under analysis:

These general notes apply across the board:

And we believe that these configuration notes allow for a fair comparison of the different technologies:

Finally, here are the individual server configurations per environment:

Common to all tests, we used an EC2 instance: m5.xlarge

So, now that we have established the setup, let’s take a look at what we found.

Since disk space costs money, you’d want to see how the raw data occupied space in each environment. There’s a clear “winner” there: Percona Server for MySQL with RocksDB storage engine. Of course, there are lots more factors to consider.

For the performance tests, we used this set up as common to all:

Then, per server, we worked through individual tests as follows:

Server tests #3 and #4: Percona Server for MySQL on EC2

First of all, then, let’s review throughput results for every tested database. In case things aren’t complicated enough, at this stage we’re also taking into account whether io1 or gp2 volume type has an effect on the outcomes. AWS offers this comparison of io1 and gp2. 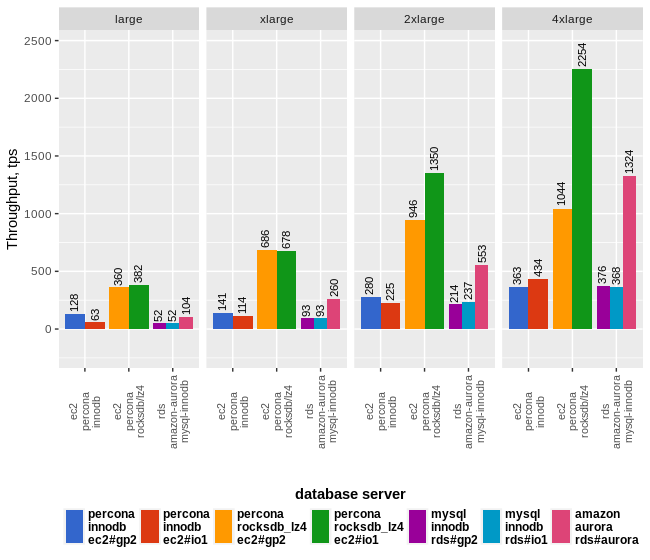 In the next post in this series, I will take a look at the total cost of one test run for each database, as well as review which databases perform most efficiently by analysis transaction cost ratio.