MySQL: The Impact of Transactions on Query Throughput

Recently I had a customer where every single query was running in a transaction, as well as even the simplest selects. Unfortunately, this is not unique and many connectors like Java love to do that.

In their case, the Java connector changed autocommit=off for the connection itself at the beginning, and as these were permanent connections they never or almost never reconnected.

In the slow query log we could see after every select there was a commit. So why is this a problem?

Like always, the best way to deal with a problem to test it. I have created two EC2 instances t3.xlarge with Ubuntu, one for application and one for the databases.  I have used sysbench to run my tests.

I have created a table with 1 million records and was running simple primary key point selects against the database. I was using three threads and running only 1 select per transactions,  and every test was running for 60 seconds. I ran every test 3 times and took the average number of these three runs. These are the only MySQL variables I have changed:

The dataset could fit in memory as there were no disk reads.

I have tested four cases:

I was not trying to do a proper performance test to see the maximum performance on the server. I was only trying to demonstrate the impact on the executed query number if we are running every single query in a transaction in a limited time window.

Because my customer was running on MySQL 5.6 I did my first tests on that version as well. 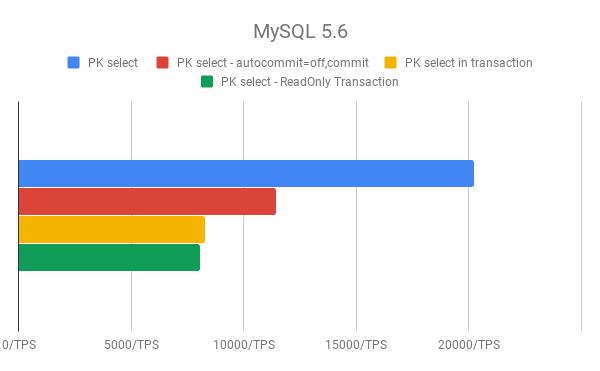 Here we can see the average transactions per second (inside InnoDB everything is a transaction even if we do not start it explicitly). In the same time window, sysbench could run more than twice as many PK lookups without transactions than in transactions. You can see there are big differences here.

But what does that mean? My Selects are slower?

Let me try to oversimplify this. Let’s say your database server can run only 1 query per second. That means in 100 seconds it can run 100 queries. What if we are using transaction? In the first second the database server will run the begin, then it runs the select , and after that in the third second, it will run the commit.  So it will run 1 select in every three seconds. In 100 seconds 33 begin, 33 select, 33 commit. Your query time is not going to be higher but your throughput is going to be impacted.

If there is no real reason (example repeatable read) why your selects should run in transactions, I would recommend to avoid them, because you can save a lot of extra roundtrip between the application and the database server, some CPU time, and even begin commits very fast, but in large scale you can save time as well.

What is a transaction?

Database transactions, as implemented by InnoDB, have properties that are collectively known by the acronym ACID, for atomicity, consistency, isolation, and durability.

InnoDB associates every transaction with a transaction ID (TRX_ID field is part of every single row). That transaction ID is only needed for operations that might perform writes or locks like Select ... for update.  Also, this transaction ID is used to create a read view, a snapshot of the database, as this is part of the MVCC mechanism. MVCC keeps information of the old pages until the transaction is running, an example is to be able to rollback. These pages also used to provide consistent reads. Even if this is just a single long-running select, because we started a transaction, InnoDB has to keep track of these changes. There are other internal processes happening when we explicitly start a transaction, which might be not necessary for a simple select query.

This is one of the reasons why they developed Read-only transactions to avoid these side effects.

When autocommit is enabled and we do not start transactions explicitly, the insert/delete/update operations are still handled inside MySQL like transactions, but InnoDB tries to detect non-locking select queries which should be handled like Read-only transactions.

I was curious if is there any difference/improvements between the versions so I re-ran my tests on multiple MySQL versions. 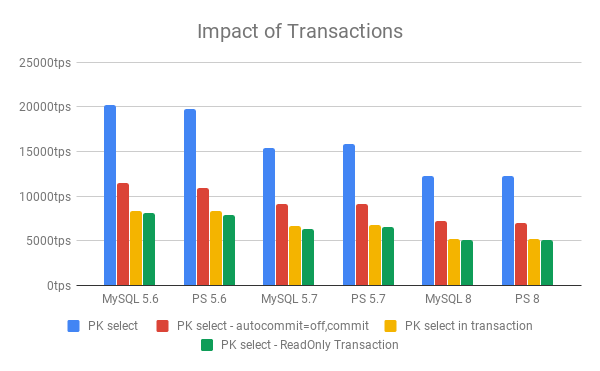 What we can see here? We can see that a big difference is still there in all versions, and actually, I was not expecting it to disappear because from the application point of view it still has to do the round trips to the database server.

We knew there is a regression in the newer version of MySQL regarding the performance of point lookups. Mark Callaghan and many other people already blogged about this, but as we can see the regression is quite big. I am already working on another blog post where I am trying to dig deeper on what is causing this degradation.

The newer version of MySQL servers are more optimized on high concurrent workloads, and they can handle more threads at the same time as the previous versions. There are many detailed blog posts in this area as well.

We can also see, for these simple queries starting Read-only transactions, they are actually a lit bit slower than starting normal transactions. The difference is between 1-4% while in MySQL 8.0 it is around 1% slower. That is a very small difference but is continuous through all the tests.