How to Add More Nodes to an Existing ProxySQL Cluster

In my previous post, some time ago, I wrote about the new cluster feature of ProxySQL. For that post, we were working with three nodes, now we’ll work with even more! If you’ve installed one ProxySQL per application instance and would like to work up to more, then this post is for you. If this is new to you, though, read my earlier post first for more context.

Check the image below to understand the structure of “one ProxySQL per application”. This means you have ProxySQL installed, and your application (Java, PHP, Apache server etc) in the same VM (virtual machine). 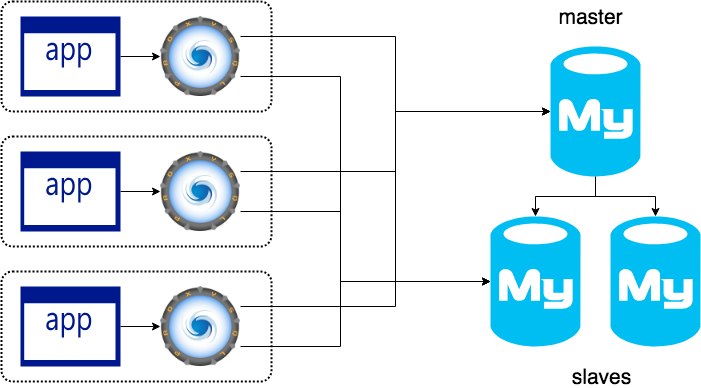 Having taken a look at that you probably have a few questions, such as:

Remember there are only four tables which can be synced over the cluster. These tables are:

From a new proxysql cluster installation

After a fresh installation all those four tables are empty. That means if we configure it as a new node in a cluster, all rows in those tables will be copied instantly.

Generally the installation is straightforward.

Connect to the ProxySQL console:

Now there are two steps remaining:

How to configure the global_variables table

Below is an example showing the minimal parameters to set – you can change the username and password according to your needs.

You can update the parameters of the current node by using this as a template:

At this point you need keep in mind that you will need to INSERT into this table “all” the IPs from the other ProxySQL nodes.

Why so? Because this table will have a new epoch time and this process will overwrite the rest of the nodes listed by its last table update.

If you already have many ProxySQL servers in the cluster, you can run mysqldump as this will help speed up this process.

If that’s the case, you need to find the most up to date node and use mysqldump to export the data from the proxysql_servers table.

How would you find this node? There are a few stats tables in ProxySQL, and in this case we can use two of these to help identify the right node.

For each table, we can see different versions, each related to table changes.  In this case, we need to look for the latest epoch time for the table “proxysql_servers“. In this example , above, we can see that the server with the IP address of  10.0.1.1 is the latest version.  We can now run the next command to get a backup of all the IP data from the current cluster

You can run the next SELECTs to verify that the new node has the data from the current cluster, and in doing so ensure that the nodes are in sync as expected:

How can we check if there are errors in the synchronization process?

Run the next command to fetch data from the table stats_proxysql_servers_checksums:

This indicates that these nodes have different data. Is this correct? Well, yes, in this case, since in our example the nodes 1 and 2 were created on the current ProxySQL cluster

How do you fix this?

Well, you connect to the node 1 and INSERT the data for node 3 (the new node).

This change will propagate the changes over the current cluster – node 2 and node 3 – and will update the table proxysql_servers.

What happens if the new nodes already exist in the proxysql_servers table of the current cluster?

You can add the new ProxySQL node IPs to the current cluster before you start installing and configuring the new nodes.

In fact, this works fine and without any issues. The steps I went through, above, are the same, but when you check for differences in the table stats_proxysql_servers_checksums you should find there are none, and that the “diff” column should be displayed as 0.

How does ProxySQL monitor other ProxySQL nodes to sync locally?

Here’s a link to the explanation from the ProxySQL wiki page https://github.com/sysown/proxysql/wiki/ProxySQL-Cluster

Proxies monitor each other, so they immediately recognize that when a checksum of a configuration changes, the configuration has changed. It’s possible that the remote peer’s configuration and its own configuration were changed at the same time, or within a short period of time. So the proxy must also check its own status.

Note: it is possible that a difference is detected against one node, but the sync is performed against a different node. Since ProxySQL bases the sync on the node with the highest epoch, it is expected that all the nodes will converge.

To perform the syncing process:

These next steps run automatically when other nodes detect a change: this is an example for the table mysql_users

In the node where it detected a difference in the checksum, it will run the next statements automatically:

After you’ve added the new ProxySQL node to the cluster, all four tables will sync immediately using the node with the highest epoch time as the basis for sync. Any changes to the tables previously added to the cluster, will propagate and overwrite the cluster

ProxySQL cluster is a powerful tool, and it’s being used more and more in production environments. If you haven’t tried it before, I’d recommend that you start testing ProxySQL cluster with a view to improving your application’s service. Hope you found this post helpful!

Walter has worked as a DBA since 2010 in few companies like social gaming company in Latin America and other company in Spain. He lives in Mendoza, Argentina, He likes play football and he is learning to play guitar in his free time