One Million Tables in MySQL 8.0

In my previous blog post, I talked about new general tablespaces in MySQL 8.0. Recently MySQL 8.0.3-rc was released, which includes a new data dictionary. My goal is to create one million tables in MySQL and test the performance.

Q: Why million tables in MySQL? Is it even realistic? How does this happen?

Usually, millions of tables in MySQL is a result of “a schema per customer” Software as a Service (SaaS) approach. For the purposes of customer data isolation (security) and logical data partitioning (performance), each “customer” has a dedicated schema. You can think of a WordPress hosting service (or any CMS based hosting) where each customer has their own dedicated schema. With 10K customers per MySQL server, we could end up with millions of tables.

Q: Should you design an application with >1 million tables?

Having separate tables is one of the easiest designs for a multi-tenant or SaaS application, and makes it easy to shard and re-distribute your workload between servers. In fact, the table-per-customer or schema-per-customer design has the quickest time-to-market, which is why we see it a lot in consulting. In this post, we are not aiming to cover the merits of should you do this (if your application has high churn or millions of free users, for example, it might not be a good idea). Instead, we will focus on if the new data dictionary provides relief to a historical pain point.

Q: Why is one million tables a problem?

The main issue results from the fact that MySQL needs to open (and eventually close) the table structure file (FRM file). With one million tables, we are talking about at least one million files. Originally MySQL fixed it with table_open_cache and table_definition_cache. However, the maximum value for table_open_cache is 524288. In addition, it is split into 16 partitions by default (to reduce the contention). So it is not ideal. MySQL 8.0 has removed FRM files for InnoDB, and will now allow you to create general tablespaces. I’ve demonstrated how we can create tablespace per customer in MySQL 8.0, which is ideal for “schema-per-customer” approach (we can move/migrate one customer data to a new server by importing/exporting the tablespace).

One million tables in MySQL 5.7

Recently, I’ve created a test with one million tables. The test creates 10K databases, and each database contains 100 tables. To use a standard benchmark I’ve employed sysbench table structure.

This also creates a huge overhead: with one million tables we have ~two million files. Each .frm file and .ibd file size sums up to 175G:

Sysbench will choose one table randomly out of one million. With oltp_tables_count = 1 and oltp_db_count = 100, it will only choose the first table (sbtest1) out of the first 100 databases (randomly).

Insert into one million random tables:

This is expected. Here I’m testing the worst-case scenario, where we can’t keep all table open handlers and table definitions in cache (memory) since the table_open_cache and table_definition_cache both have a limit of 524288.

Also, normally we can expect a huge skew between access to the tables. There can be only 20% active customers (80-20 rule), meaning that we can only expect active access to 2K databases. In addition, there will be old or unused tables so we can expect around 100K or less of active tables.

The above results are from this server:

I’ve used the following script to create 100 tables in one schema all in one tablespace:

The new MySQL 8.0.3-rc also uses the new data dictionary, so all MyISAM tables in the mysql schema are removed and all metadata is stored in additional mysql.ibd file.

Creating InnoDB tables fast enough can be a task by itself. Stewart Smith published a blog post a while ago where he focused on optimizing time to create 30K tables in MySQL.

The problem is that after creating an .ibd file, MySQL needs to “fsync” it. However, when creating a table inside the tablespace, there is no fsync. I’ve created a simple script to create tables in parallel, one thread per database:

That script works perfectly in MySQL 8.0.1-dmr and creates one million tables in 25 minutes and 28 seconds (1528 seconds). That is ~654 tables per second. That is significantly faster than ~30 tables per second in the original Stewart’s test and 2x faster than a test where all fsyncs were artificially disabled using libeat-my-data library.

Unfortunately, in MySQL 8.0.3-rc some regression was introduced. In MySQL 8.0.3-rc I can see heavy mutex contention, and the table creation speed dropped from 25 minutes to ~280 minutes. I’ve filed a bug report: performance regression: “create table” speed and scalability in 8.0.3.

With general tablespaces and no .frm files, the size on disk decreased:

Please note though that in MySQL 8.0.3-rc, with new native data dictionary, the size on disk increased as it needs to write additional information (Serialized Dictionary Information, SDI) to the tablespace files:

Benchmarking the insert speed in MySQL 8.0

I’ve repeated the same test I’ve done for MySQL 5.7 in MySQL 8.0.3-rc (and in 8.0.1-dmr), but using general tablespace. I created 10K databases (=10K tablespace files), each database has100 tables and each database resides in its own tablespace.

Unfortunately, with one million random table accesses in MySQL 8.0 (both 8.0.1 and 8.0.3), we can still see that it stalls on opening tables (even with no .frm files and general tablespaces):

And the transactions per second drops to ~2K.

Here I’ve expected different behavior. With the .frm files gone and with tablespace_definition_cache set to more than 10K (we have only 10K tablespace files), I’ve expected that MySQL does not have to open and close files. It looks like this is not the case.

I can also see the table opening (since the server started):

This is easier to see on the graphs from PMM. Insert per second for the two runs (both running 16 threads):

As we can see, the first run is dong 50K -100K inserts/second. Second run is only limited to ~2.5 inserts per second:

As we can see, MySQL performs ~1.1K table definition openings per second and has ~2K table cache misses due to the overflow: 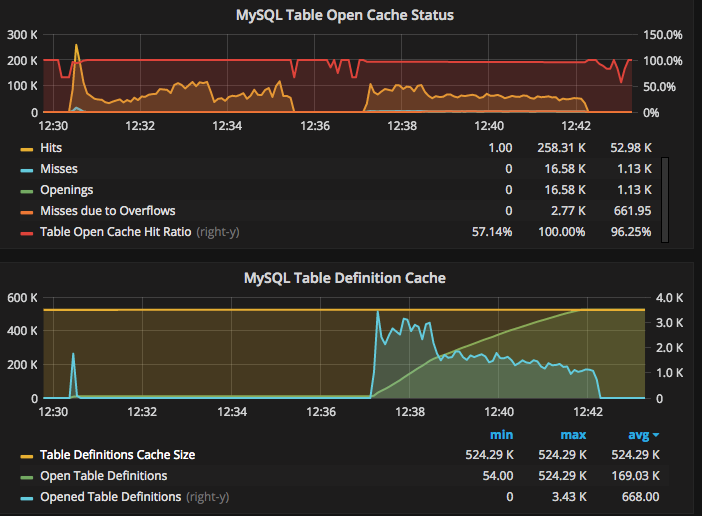 When inserting against only 1K random tables (one specific table in a random database, that way we almost guarantee that one thread will always write to a different tablespace file), the table_open_cache got warmed up quickly. After a couple of seconds, the sysbench test starts showing > 100K tps. The processlist looks much better (compare the statement latency and lock latency to the above as well):

There are only a very limited amount of table openings:

MySQL 8.0 general tablespaces looks very promising. It is finally possible to create one million tables in MySQL without the need to create two million files. Actually, MySQL 8 can handle many tables very well as long as table cache misses are kept to a minimum.

At the same time, the problem with “Opening tables” (worst case scenario test) still persists in MySQL 8.0.3-rc and limits the throughput. I expected to see that MySQL does not have to open/close the table structure file. I also hope the create table regression bug is fixed in the next MySQL 8.0 version.

I’ve not tested other new features in the new data dictionary in 8.0.3-rc: i.e., atomic DDL (InnoDB now supports atomic DDL, which ensures that DDL operations are either committed in their entirety or rolled back in case of an unplanned server stoppage). That is the topic of the next blog post.