In this blog post, I will cover the Percona-Lab/mongodb_consistent_backup tool and the improvements in the 1.0.1 release of the tool.

mongodb_consistent_backup is a tool for performing cluster consistent backups on MongoDB clusters or single-replica sets. This tool is open source Python code, developed by Percona and published under our Percona-Lab GitHub repository. Percona-Lab is a place for code projects maintained and supported with only best-effort from Percona.

By considering the entire MongoDB cluster’s shards and individual shard members, mongodb_consistent_backup can backup a cluster with one or many shards to a single point in time. Single-point-in-time consistency of cluster backups is critical to data integrity for any “sharded” database technology, and is a topic often overlooked in database deployments.

This topic is explained in detail by David Murphy in this Percona blog: https://www.percona.com/blog/2016/07/25/mongodb-consistent-backups/.

mongodb_consistent_backup originally was a single replica set backup script internal to Percona, which morphed into a large multi-threaded/concurrent Python project. It was released to the public (Percona-Lab) with some rough edges.

This release focuses on the efficiency and reliability of the existing components, many of the pain-points in extending, deploying and troubleshooting the tool and adding some small features.

The tool was moved to use a structured, nested YAML config file instead of the messy config implemented in 0.x.

You can see a full example of this new format at this URL: https://github.com/Percona-Lab/mongodb_consistent_backup/blob/master/conf/mongodb-consistent-backup.example.conf

Overall there is much more logged in this release, both in “regular” mode and “verbose” mode. A highlight for this release is live logging of the output of mongodump, something that was missing from the 0.x versions of the tool.

Also, while backup data is gathered the status output from each Oplog tailing thread is now logged every 30 seconds (by default):

You can now write log files to disk by setting the ‘log_dir’ config variable or ‘–log-dir’ command-line flag. One log file per backup is written to this directory, with a symlink pointing to the latest log file. The previous backup’s log file is automatically compressed with gzip.

ZBackup is an open-source de-duplication, compression and (optional) encryption tool for archive-like data (similar to backups). Files that are fed into ZBackup are organized at a block-level into pieces called “bundles”. When more files are fed into ZBackup, it can re-use the bundles when it notices the same blocks are being backed up. This approach provides significant savings on disk space (required for many database backups). To add to the savings, all data in ZBackup is compressed using LZMA compression, which generally compresses better than gzip/deflate or zip. ZBackup also supports an optional AES-128 encryption at rest. You enable it by providing a key file to ZBackup that allows it to encode/decode the data.

Below is an example of ZBackup used on a small database (about 1GB) that is constantly growing. 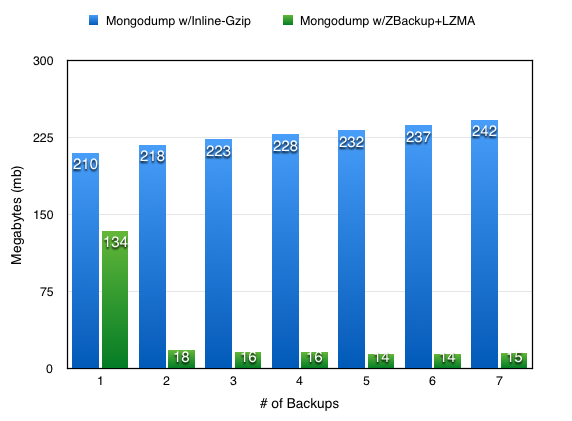 To try out ZBackup as an archive method, use one of these methods:

This archive method causes mongodb_consistent_backup to create a subdirectory in the backup location named “mongodb-consistent-backup_zbackup” and import completed backups into ZBackup after the backup stage. This directory contains the ZBackup storage files that it needs to operate, and they should not be modified!

Of course, there are trade-offs. ZBackup adds some additional system resource usage and time to the overall backup AND restore process – both importing and exporting data into ZBackup takes some additional time.

By default ZBackup’s restore uses a very small amount of RAM for cache, so increasing the cache with the “–cache-size” flag may improve restore performance. ZBackup uses threading so more CPUs can also improve performance of backups and restores.

Some interesting use cases for a Docker-based deployment of the tool come to mind:

To run the latest Dockerhub image:

To just list the “help” page (all available options):

An example script for running the container with persistent Docker volumes is available here: https://github.com/Percona-Lab/mongodb_consistent_backup/tree/master/scripts

mongodb_consistent_backup 1.0 introduces the ability to define a list of multiple “seed” hosts, preventing a potential for a single-point of failure in your backups! If a host in the list is unavailable, it will be skipped.

Multiple hosts should be specified with this replica-set URL format, many hosts separated by commas:

Or you can specify a comma-separated list without the replica set name for non-replset nodes (eg: mongos or non-replset config servers):

Also, the functionality to use cluster Config Servers as seed hosts was added. Before version 1.0 a clustered backup needed to use a single mongos router as a seed host to find all shards and cluster members. Sometimes mongos routers can come and go as you scale, making this design brittle.

With this new functionality, mongodb_consistent_backup can use the Cluster Config Servers to map out the cluster, which are usually three times the fairly-static hosts in an infrastructure. This makes the deployment and operation of the tool a bit simpler and more reliable.

As mentioned, a focus in this release was improving the existing code. A major refactoring of the code structure of the project was completed in 1.0, and moves the major “phases” or “stages” in the tool to their own Python sub-modules (e.g., “Backup” and “Archive”) that then auto-load their various “methods” like “mongodump” or “Zbackup”.

The code was broken into these high-level stages:

Some interesting code enhancements include:

Another focus was efficiency and preventing race conditions. The tool should be much less susceptible to error as a result, although if you see any problems we’d like to hear about them on our GitHub “Issues” page.

Lastly, we encourage the open source community to contribute additional functionality to this tool via our GitHub!

More about our releases can be seen here: https://github.com/Percona-Lab/mongodb_consistent_backup/releases.