A lot of things have been said about UUID, and storing UUID in an optimized way. Now that we have generated columns, we can store the decomposed information inside the UUID and merge it again with generated columns. This blog post demonstrates this process.

First, I used a simple table with one char field that I called uuid_char to establish a base case. I used this table with and without a primary key:

I performed the tests on a local VM over MySQL 5.7.17 for 30 seconds, with only two threads, because I wanted to just compare the executions:

One pair of executions is with the UUID generated by sysbench, which simulates the UUID that comes from the app:

An alternative execution is for when the UUID is generated by the MySQL function uuid():

Below we can see the results: 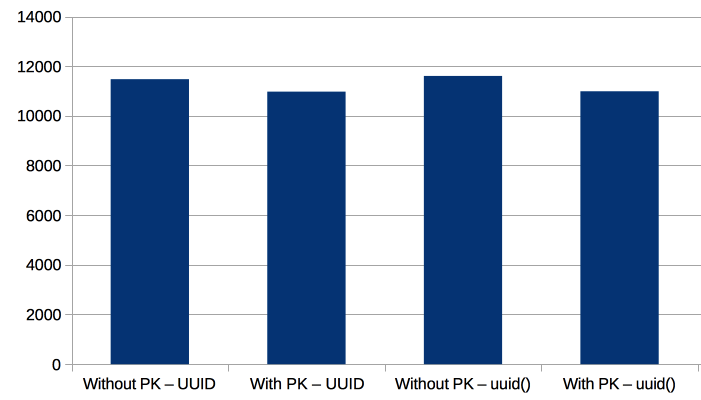 The inserts are faster without a PK (but only by 5%), and using the uuid() function doesn’t impact performance.

Now, let’s see the alternative method, which is decomposing the UUID. It has four main information sets:

The structure of the table that we’ll use is:

To understand how a UUID is unwrapped, I used this store procedure (which receives a UUID and inserts it into the table):

If I wanted to get the UUID again, I can use these two generated columns:

We performed tests over five scenarios:

The difference between the Base and the previous table structure with Primary Keys is very small. So, the new basic structure has no impact on performance.

We see that Base and +Char Field have the same performance. So leaving a char field has no performance impact (it just uses more disk space).

Using generated columns impact performance. This is expected, as the columns are generated to validate the type before the row is inserted.

Finally, the use of triggers and store procedure has the same impact in performance.

These are the three structures to the tables:

And this is the trigger: