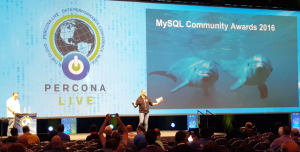 We wrapped up Thursday morning’s Percona Live 2016 keynotes (April 21)  with The MySQL Community Award Ceremony. The MySQL Community Awards is a community-based initiative, with the goal of publicly recognizing contributors to the MySQL ecosystem. The idea is to publicly recognize contributors to the MySQL ecosystem. The entire process of discussing, voting and awarding is controlled by an independent group of community members, typically based on past winners or their representatives, as well as known contributors. It is a self-appointed, self-declared, self-making-up-the-rules-as-it-goes committee. It is also very aware of the importance of the community; a no-nonsense, non-political, adhering to tradition, self-criticizing committee.

The categories can be found here.

We celebrated the members of the open source community, and some big open source contributors from the past year! The winners this year were:

Community Contributors of the Year:

Application of the Year:

Corporate Contributor of the Year:

Congratulation to all the winners! You can watch the whole ceremony below (it’s about 15 minutes long).