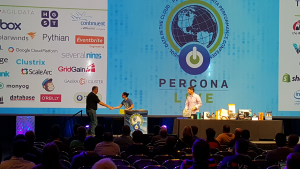 Well, that is it for Percona Live 2016! This year was bigger and better than last year and included more sponsors, speakers, technologies, and talks than ever before. Once again we’d like to thank everybody who participated, and the entire open source community in general: without your dedication and spirit, none of this would be possible.

At the prize ceremony, many of the exhibitors gave away a prize to the people who filled out and turned in a completed conference passport, as well as some gifts for those who completed surveys for the talks. Prizes ranged from $50 gift certificates, signed copies of Bill Nye’s book Unstoppable, an Amazon Echo, GoPro cameras, an Oculus Rift, a Playstation, and more. All the winners left happy (except maybe the guy who got the Mr. Spock socks, although I would have been pleased).

Thanks for coming, and we’ll see you in Amsterdam (and next year)!

Below is a video of the ceremony in full (it’s about 15 minutes long).