During the last couple of months I have been involved in an unusually high amount of performance audits for e-commerce applications running with Magento. And although the systems were quite different, they also had one thing in common: the MySQL query cache was very useful. That was counter-intuitive for me as I’ve always expected the query cache to be such a bottleneck that response time is better when the query cache is turned off no matter what. That lead me to run a few experiments to better understand when the query cache can be helpful.

The query cache is well known for its contentions: a global mutex has to be acquired for any read or write operation, which means that any access is serialized. This was not an issue 15 years ago, but with today’s multi-core servers, such serialization is the best way to kill performance.

However from a performance point of view, any query cache hit is served in a few tens of microseconds while the fastest access with InnoDB (primary lookup) still requires several hundreds of microseconds. Yes, the query cache is at least an order of magnitude faster than any query that goes to InnoDB.

To better understand how good or bad the query cache can be, I set up a very simple benchmark:

Note that the test is designed to be unfavorable to the query cache as the whole dataset fits in the buffer pool and the SELECT statements are very simple. Also note that I configured the query cache to be large enough so that no entry was evicted from the cache due to low memory.

First here are the results when the query cache is enabled: 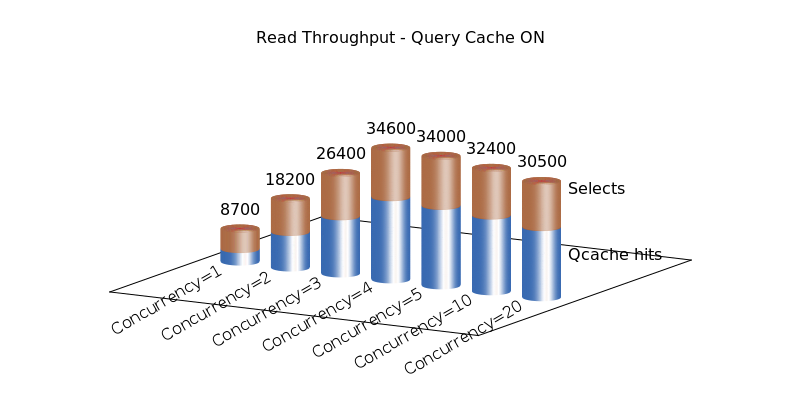 This configuration scales well up to 4 concurrent threads, but then the throughput degrades very quickly. With 10 concurrent threads, SHOW PROCESSLIST is enough to show you that all threads spend all their time waiting for the query cache mutex. Okay, this is not a surprise.

When the query cache is disabled, this is another story:

Throughput scales well up to somewhere between 10 and 20 threads (for the record the server I was using had 16 cores). But more importantly, even at the higher concurrencies, the overall throughput continued to increase: at 20 concurrent threads, MySQL was able to serve nearly 3x more queries without the query cache.

With Magento, you can expect to have a light write workload, very low concurrency and also quite complex SELECT statements. Given the results of our simple benchmarks, it is finally not that surprising that the MySQL query cache is a good fit in this case.

It is also worth noting that many applications run a database workload where writes are light and concurrency is low: the query cache should then not be discarded immediately. And maybe it is time for Oracle to make plans to improve the query cache as suggested by Peter a few years ago?