Memcache access for MySQL Cluster (or NDBCluster) provides faster access to the data because it avoids the SQL parsing overhead for simple lookups – which is a great feature. But what happens if I try to get multiple records via memcache API (multi-GET) and via SQL (SELECT with IN())? I’ve encountered this a few times now, so I decided to blog about it. I did a very simple benchmark with the following script:

The definitions for memcache access in the ndbmemcache schema were the following.

I had the following results – the variance is there because I did this benchmark on a cluster running in virtualbox on my workstation, but the trend shows clearly. 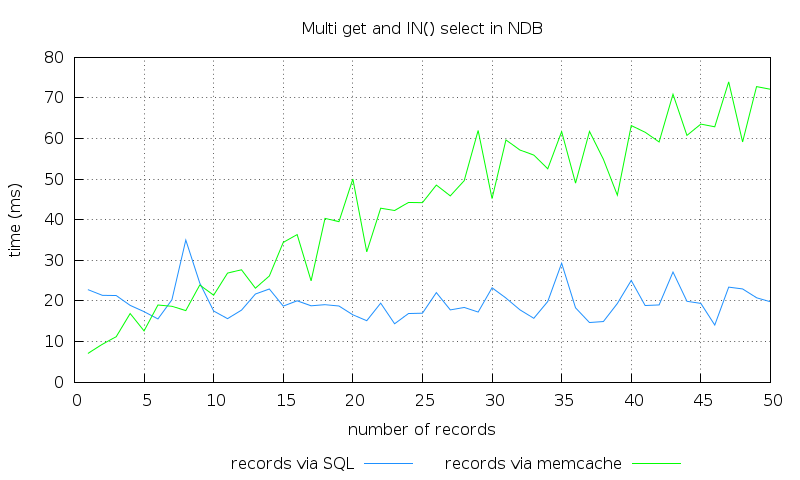 The surprising result is that if we fetch 1 or a few records, the memcached protocol access is indeed faster. But the more records we fetch, the speed of the SQL won’t change too much, while the time required to perform the memcache multi-get is proportional with the number of record fetched. This result actually makes sense if we dig deeper. The memcache access can’t use batching, because of the way multi-get is implemented in memcached itself. On the server side, there is simply no multi-get command. The get commands are done in a loop, one by one. With a regular memcache server, one multi-get command will need one network roundtrip between the client and the server. In NDB’s case, for each key access, a roundtrip still has to be made to the storage node, and this overhead is not present in the SQL node’s case (the api and the storage nodes were running on different virtual macines). If we are using the memcache API nodes with caching, the situations gets somewhat better if the key we are looking for is in memcached’s memory (the network roundtrip can be skipped in this case).

Does this mean that memcache API is bad and unusable? I don’t think so. Most workloads, which are in need of the memcache protocol access, will most likely use it for getting one record at a time. It shines there compared to SQL (response time is less than half). This example shows that for the “Which is faster?” question, the correct answer is still, “It depends on the workload.” For most cases, anyhow.