I have been working for a customer benchmarking insert performance on Amazon EC2, and I have some interesting results that I wanted to share. I used a nice and effective tool iiBench which has been developed by Tokutek. Though the “1 billion row insert challenge” for which this tool was originally built is long over, but still the tool serves well for benchmark purposes.

OK, let’s start off with the configuration details.

First of all let me describe the EC2 instance type that I used.

I chose m2.4xlarge instance as that’s the instance type with highest memory available, and memory is what really really matters.

As for the IO configuration I chose 8 x 200G EBS volumes in software RAID 10.

I used Percona Server 5.5.22-55 for the tests. Following is the configuration that I used:

You can see that the buffer pool is sized at 55G and I am using 4 buffer pool instances to reduce the contention caused by buffer pool mutexes. Another important configuration that I am using is that I am using “estimate” flushing method available only on Percona Server. The “estimate” method reduces the impact of traditional InnoDB log flushing, which can cause downward spikes in performance. Other then that, I have also disabled query cache to avoid contention caused by query cache on write heavy workload.

OK, so that was all about the configuration of the EC2 instance and MySQL.

Now as far as the benchmark itself is concerned, I made no code changes to iiBench, and used the version available here. But I changed the table to use range partitioning. I defined a partitioning scheme such that every partition would hold 100 million rows.

The table structure of the table with no secondary indexes is as follows:

While the structure of the table with secondary indexes is as follows:

Now let’s come down to the interesting part. 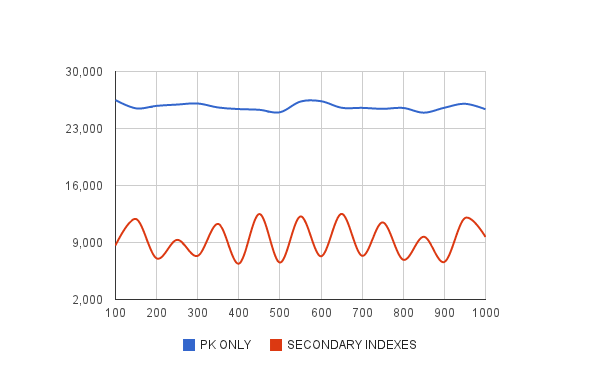