Aligning IO on a hard disk RAID – the Benchmarks

In the first part of this article I have showed how I align IO, now I want to share results of the benchmark that I have been running to see how much benefit can we get from a proper IO alignment on a 4-disk RAID1+0 with 64k stripe element. I haven’t been running any benchmarks in a while so be careful with my results and forgiving to my mistakes

Here is the summary of the system I have been running this on (for brevity I have removed some irrelevant information):

It says controller cache is set to write-through (WT), though in fact for every benchmark I have repeated it with (a) write-through and (b) write-back to see if write-back cache would minimize the effects of misalignment.

File system of choice was XFS. Barriers and physical disk cache was disabled. The tool I used was sysbench 0.4.10 that came with this Ubuntu system. I have run every fileio benchmark and an IO bound read-write oltp benchmark in autocommit mode.

For the FileIO benchmark, I used 64 files – 1GB, 4GB and 16GB total in size with 1, 4 and 8 threads. The operations were done in 16kB units to mimic InnoDB pages. There were couple interesting surprised I faced:

1. After I got (what I thought was) the best configuration, I added LVM on top of that and the performance improved another 20-40%. It took me a while to figure it out, but here’s what happened – for XFS file system on a raw partition I was using full partition size which was slightly over 1TB in size. When I added LVM on top however, I made the logical volume slightly below 1TB. Investigating this I found that 32-bit xfs inodes (which are used by default) have to live in the first terabyte of the device which seems to have affected the performance here (IMO that’s because of where first data extents were placed in this case). When I have mounted the partition with inode64 option however, the effect disappeared and performance without LVM was slightly better than with LVM as expected. I had to redo all of the benchmarks to get the numbers right.

2. I was running vmstat during one of the tests and my eye caught the spike in OS buffers during “prepare” phase of sysbench. I found out that sysbench would not honor –file-extra-flags during “prepare” phase and instead of having files created using direct IO they were buffered in OS cache and so writes to files were serialized until they were fully overwritten and that way flushed from OS buffers. Buffers would be flushed within first few seconds so the effects of this were marginal. Alexey Kopytov fixed this in the sysbench trunk immediately, though I didn’t want to recompile sysbench on this system so I’ve used Domas’ uncache after prepare to make sure caches were clean.

As the goal was to compare performance with different IO alignment, not different MySQL configurations, I didn’t try out different MySQL versions or settings. Moreover, I have been running these benchmarks for a customer so I just used the setting that they would have used anyway. One thing I did change was – I have significantly reduced InnoDB buffer pool to make sure the benchmark is IO bound.

That said, benchmark was running on a Percona Server 5.0.92-87 with the following my.cnf configuration:

Here’s the different settings that I have ran the same benchmark on. As I mentioned earlier, each of those were run twice – first with RAID controller cache set to Write-Through and then to Write-Back.

1. Baseline – misalignment on the partition table, no LVM and no alignment settings in the file system. This is what you would often get on RHEL5, Ubuntu 8.04 or similar “older” systems if you wouldn’t do anything with respect to IO alignment.

2. Misalignment on the partition table, but proper alignment options on the file system. This is what we get when file system tries to balance writes but is not aware that it is not aligned to the beginning of the stripe element.

3. 1M alignment in partition table but no options on the file system. You should get this on RHEL6, Ubuntu 10.04 and similar systems if you wouldn’t do anything with respect to IO alignment yourself. In this case offset is correct, but file system is unaware how to align files properly.

4. Partition table and file system properly aligned; sunit/swidth set during mkfs. No LVM at this point.

5. Partition table aligned properly; sunit/swidth set during mounting but not during mkfs. This is your best option if you have a proper alignment in partition table but you did not set alignment options in xfs when creating it and you don’t want or can’t format the file system. One thing to note however – files that were written before this was set may still be unaligned, though xfs defragmentation may be able to fix that (not verified).

I had a hard time thinking how it would be best to present results so it’s not too stuffed and actually interesting. I decided that instead of preparing charts for each benchmark, I’ll just describe few less interesting numbers first, then I’ll show graphs for more interesting results. Let me know if you thought this was a bad idea

Sequential write results were a bit more interesting. With WT (write-through) cache enabled, performance was really poor whatsoever and there was virtually no difference whether it was 1 thread, 4 or 8 threads. Different file sizes made no difference too. Write-back cache gave an incredible performance boost – up to 33x in single-threaded workload. File system IO alignment seems to have made a difference – up to 15% with write-back cache enabled. Here’s 1GB seqwr with WT cache: 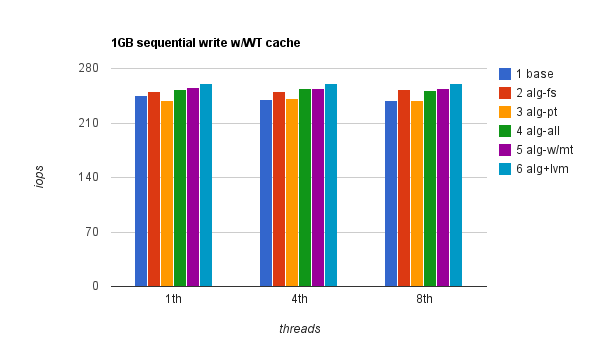 And just to show you the difference between sequential writes with WT cache and WB cache:

Random read. This is probably the most interesting number for OLTP workload which is usually light on writes (especially if there’s a BBU protected Write-Back cache) and heavy on random reads. Regardless of the file size, the difference between aligned and misaligned reads was the same and, WT -vs- WB cache of course showed no difference at all. Here are the results: 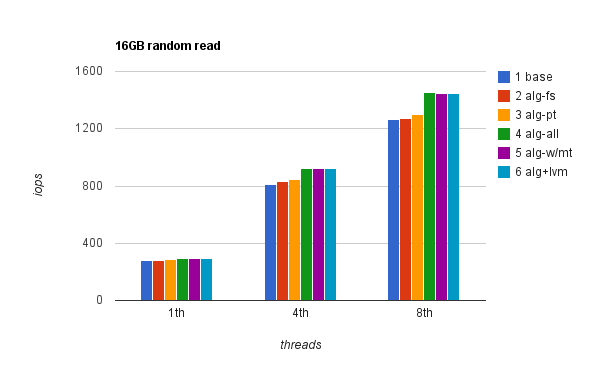 As you can see IO alignment makes a difference here and improves performance up to 15% in case of 8 threads running concurrently. Because the customer was running a database which was way bigger than 16G, I’ve repeated the random read (and write) benchmark with 8 threads and total size of 256G. While the number of operations per second was slightly lower, the difference was still 15% — 909 iops unaligned -vs- 1049 aligned.

Random write. This is an important metric for write intensive workloads where there’s a lot of data being modified, inserts are done to random positions (not consecutive PK causing page splits) etc. Benchmark results are fairly consistent regardless of file size, let’s look at them. First, results with WT cache: 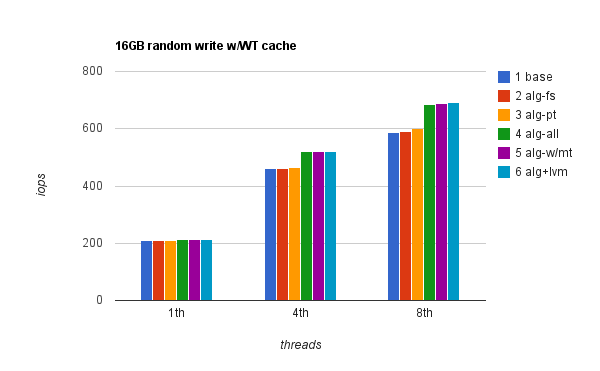 And here’s with WB cache: 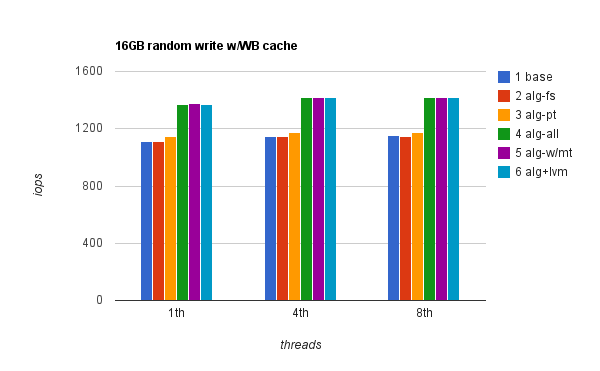 I mentioned I did single test on a larger files (same test I did for random reads) i.e. 8 thread random write benchmark on files totaling to 256GB. With WB cache enabled, I got 919 iops unaligned and 1127 iops aligned i.e. the improvement is still 23%.

From this benchmark, I only have two graphs to show you. First one is with RAID controller set to WT cache: 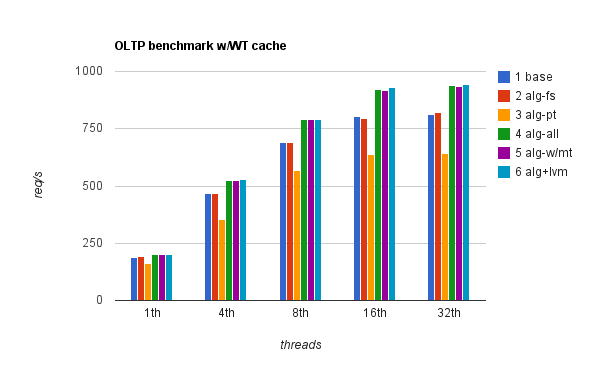 The second is with WB cache: 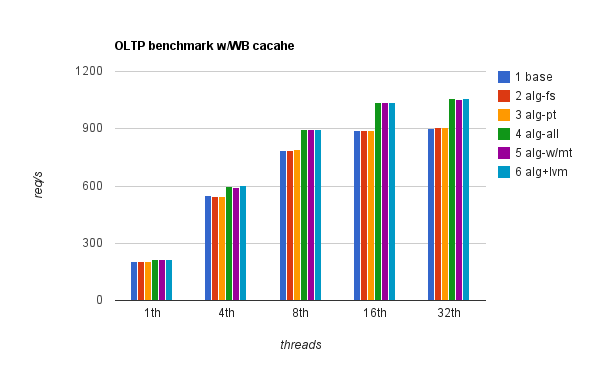 I couldn’t figure out what exactly happened with setting #3 when WB cache was disabled, what I do know though is that, based on IO stats I was gathering during the benchmarks, the reason was in fact lower number of IO operations and higher response time – so it seems in this case misaligned IO had some collateral effects in a mixed read/write environment. Note that the benchmarks were all scripted and oltp benchmarks would automatically start after file tests so if there was an error in the setting, it would have reflected across all other benchmarks for the same setting.

For the two workloads that are most relevant to databases – random reads and random writes – IO alignment on a 4-disk RAID10 with standard 64k stripe element size makes a significant difference. When I launched the system that I was benchmarking, I could clearly see the difference in production as I had another machine running sideways with the same hardware, but with a misaligned IO. Here’s diskstats from the two shards running side by side:

While number of operations from the OS perspective is very similar, due to high concurrency response time in the first case is significantly better.

It would be interesting however to run similar benchmarks on a larger RAID5 system where it should make even bigger difference on writes. Another interesting setting might be a [mirrored] RAID0 with many more stripes as not having proper file system alignment should have really interesting effects. Large stripe on the other hand should somewhat reduce the effects of misalignment, though it would definitely be interesting to run benchmarks and verify that. If you have some numbers to share, please leave a comment. Next, I plan to look at IO alignment on Flash cards to see what benefits we can get there from proper alignment.

You can find scripts and plain data here on our public wiki.