There have been recent discussions about DROP TABLE performance in InnoDB. (You can refer to Peter’s post https://www.percona.com/blog/2011/02/03/performance-problem-with-innodb-and-drop-table/ and these bug reports: http://bugs.mysql.com/bug.php?id=51325 and http://bugs.mysql.com/bug.php?id=56332.) It may not sound that serious, but if your workload often uses DROP TABLE and you have a big buffer pool, it may be a significant issue. This can get especially painful, as during this operation InnoDB holds the LOCK_open mutex, which prevents other queries from executing. So, this is a problem for a server with a large amount of memory, like the one we have in our lab: a Cisco UCS C250 with 340GB of RAM.

I ran a small benchmark to see what improvement we have. Hardware was the Cisco UCS C250, the InnoDB buffer_pool size was 144GB, and I filled the buffer pool with different amounts of data: 104GB, 52GB, 21GB. I ran a simple cycle. First I created 1000 tables:

Here are my results (results in seconds; fewer is better):

Also, to show the dynamics, here is a graph showing the number of dropped tables per second (more is better): 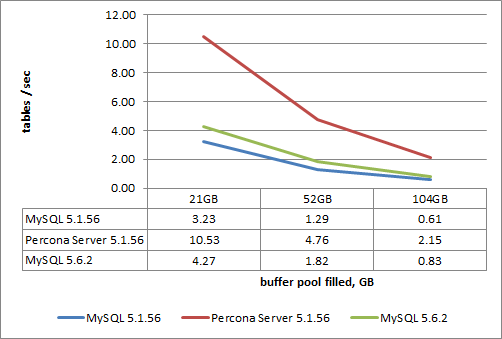 As we see, all three versions are affected by a bigger buffer pool: The more memory used, the slower DROP TABLE operates. MySQL 5.6.2 shows some improvement compared to MySQL 5.1.56, but Percona Server 5.1.56 has a better result.

(Disclaimer: The “innodb_lazy_drop_table” feature in Percona Server and this benchmark are sponsored by a Well Known Social Network.)