Is VoltDB really as scalable as they claim?

Before I begin, a disclaimer. VoltDB is not a customer, and did not pay Percona or me to investigate VoltDB’s scalability or publish this blog post. More disclaimers at the end. Short version: VoltDB is very scalable; it should scale to 120 partitions, 39 servers, and 1.6 million complex transactions per second at over 300 CPU cores, on the benchmarked configuration, with the recommended level of redundancy for HA.

First, if you’re new to VoltDB, I’ll summarize: it’s an open-source OLTP database that is designed to run on a cluster, not just a single machine, and doesn’t sacrifice consistency during a network partition. It is an in-memory shared-nothing system, and tables are partitioned across multiple servers in the cluster; high availability is ensured by keeping more copies of each partition. You query VoltDB with stored procedures, not with arbitrary SQL queries. It is designed to be very fast (hundreds of thousands of TPS) even on low-end machines, by doing away with the usual buffer pools, logs, latching, and so on.

The benchmark is VoltDB’s “voter” benchmark, which is explained briefly at this blog post. VoltDB’s Tim Callaghan ran the benchmark three times for each node count from 1 to 12, for k-factors of 0, 1, and 2. The k-factor is the number of redundant copies of each partition that the system maintains. An update to a partition in one server is synchronously replicated to all other copies in the cluster before the transaction completes.

Running all these benchmarks is a lot of work, which is why it is useful to run benchmarks for a dozen machines and model the behavior at larger cluster sizes. I used Neil J. Gunther’s Universal Scalability Law (USL) to model the cluster’s scalability. If you are not familiar with this model, probably the most succinct write-up is in a white paper I published some time ago. Let’s go right to the results and then I will discuss the details about the modeling.

Those thumbnails are small and hard to read, but that’s OK because there is something interesting and important that’s easy to miss by looking at separate images anyway. The k-factor of 0 achieves the highest throughput, which I expected because of the lack of cross-node communication. What’s odd is that the k-factor of 0 reaches its peak throughput at 35 nodes, but k-factor 1 scales to 39 nodes and k-factor 2 doesn’t top out until 46 nodes. If we plot these on the same graph, it’s easier to see: 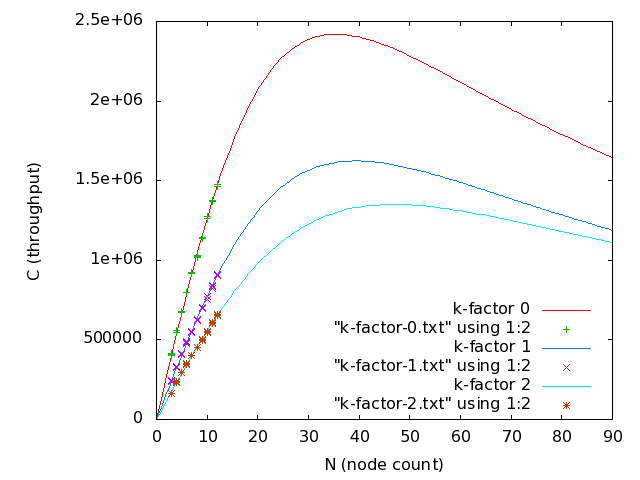 Actual and modeled results for k-factors 0, 1, and 2

This result was unexpected for me. I expect that a cluster with more inter-node communication should peak at fewer nodes. I asked Tim if he could explain, and he responded that it can be explained by the fact that at higher k-factors, there are fewer distinct partitions of data in the cluster. In all configurations, each node had 6 partitions of data, so when we keep more copies of the data, we have fewer unique partitions. In other words, the “unit of scaling” that is on the x-axis really shouldn’t be the server count, but rather the number of partitions in the system. I re-ran my models and generated the following graph: 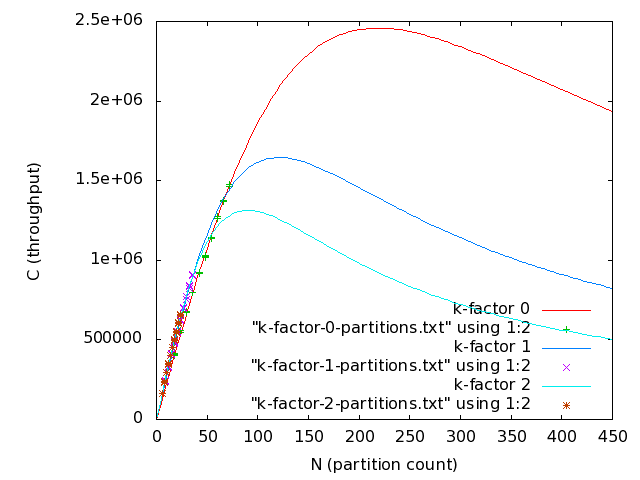 Actual and modeled results with partitions for k-factors 0, 1, and 2

When approached from this angle, the results make sense. (Individual graphs by partition for k-factors: 0, 1, 2.) Now, for the recommended degree of safety, we can see that this cluster is predicted to scale to 120 partitions, at a throughput of more than 1.6 million transactions per second. This is on commodity 8-core boxes, and with 6 partitions per server and 2 copies of each partition, that should be a 40-node cluster.

In case you don’t know what to think of that, I’ll tell you: scaling a synchronously replicated, active-active master, fully ACID, always-consistent database to a 40-server cluster is impressive. Yes, it comes with some limitations (there’s a decent write-up on highscalability.com that explains more), but that is still nothing to sneeze at.

Here are some more disclaimers and details, and I’ll try to anticipate some questions:

Let me close by answering my own question: from what I know of VoltDB it does indeed match their claim, with good scalability to dozens of servers. For more information, or to download it and try yourself, you can visit the VoltDB website.