(Note: The review was done as part of our consulting practice, but is totally independent and fully reflects our opinion)

In my talk on MySQL Conference and Expo 2010 “An Overview of Flash Storage for Databases” I mentioned that most likely there are other players coming soon. I actually was not aware about any real names at that time, it was just a guess, as PCI-E market is really attractive so FusionIO can’t stay alone for long time. So I am not surprised to see new card provided by Virident and I was lucky enough to test a pre-production sample Virident tachIOn 400GB SLC card.

I think it will be fair to say that Virident targets where right now FusionIO has a monopoly, and it will finally bring some competition to the market, which I believe is good for the end users. I am looking forward to price competition ( not having real numbers I can guess that vendors still put high margin in the price) as well as high performance in general and stable performance under high load in particular, and also competition in capacity and data reliability areas.

Couple words about product, I know that Virident engineering team was concentrating on getting stable write performance in long running
write activities and in cases when space utilization is close to 100%. As you may know (check my presentation) SSD design requires background
“garbage collector” activity, which requires space to operate and Virident card already has enough space reservation to get stable write performance even when the disk is almost full.

As for reliability, I think, the design of the card is quite neat. The card by itself contains bunch of replaceable flash modules, and each individual module can be changed in case of failure. Also internally modules are joined in RAID (it is fully transparent for end user). 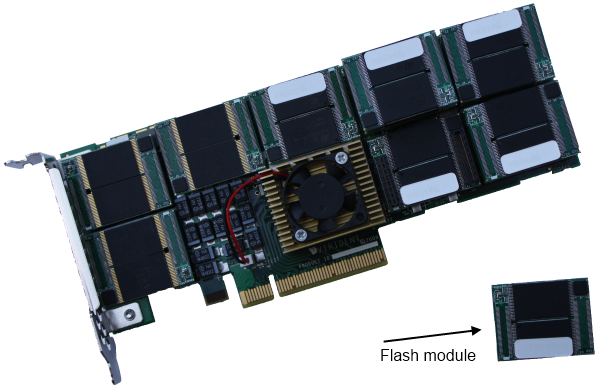 All this guarantees good level of confidence in data reliability: if a single module fails, the internal RAID will allow to continue operations, and after the replacement of module – it will be rebuilt. It still leaves the controller on card as single point of failure, but in this case all flash modules can be safely relocated to the new card with working controller. (Note: It was not tested by Percona engineers, but taken from vendor’s specification)

As for power failures – flash modules also come with capacitors which guarantees data delivery to final media even if power is lost on the main host. (Note: It was not tested by Percona engineers, but taken from vendor’s specification)

Now to most interesting part – performance numbers. I took sysbench fileio benchmark with 16KB blocksize to see what maximal performance we can expect.

The raw results are available on Wiki

And the graphs for random read, writes and sequential writes: 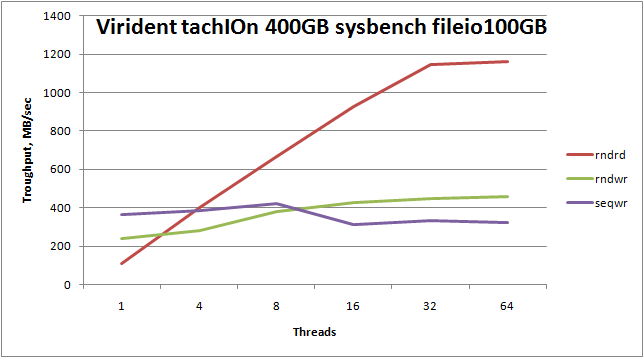 I think very interesting to see distribution of 95% response time results ( 0 time is obviously the problem in sysbench, which has no enough time resolution for such very fast operations) 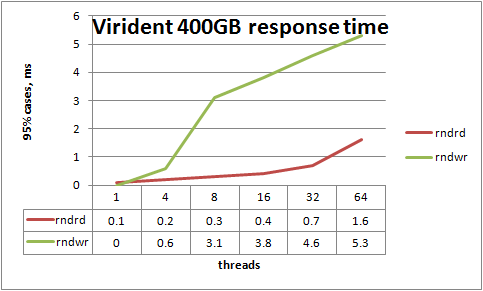 As some issue here, I should mention, that despite the good response time results,
the maximal response time in some cases can jump to 300 ms per request, and I was told
it corresponds to garbage collector activity and will be fixed in the production release of driver.

I think it would be fair to get comparison with FusionIO card, especially for write pressure case
As you may know FusionIO recommends to have space reservation to get sustainable write performance
(Tuning Techniques for Writes).

As disclaimer I want to mention that Virident tachIOn card was fine tuned by Virident engineers, while FusionIO card was tuned only by me and I may not have all knowledge needed for FusionIO tuning. 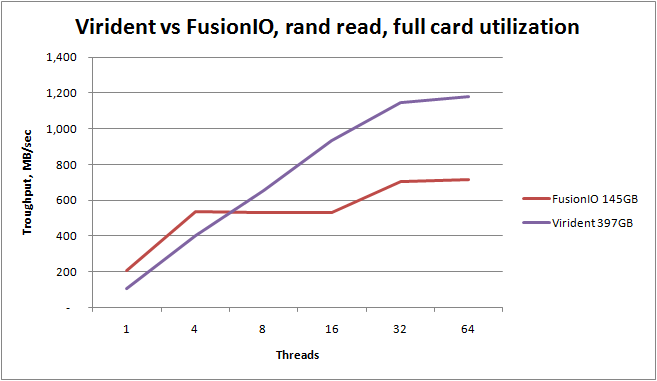 As you see in 1 and 4 threads FusionIO is better, while with more threads Virident card scales better 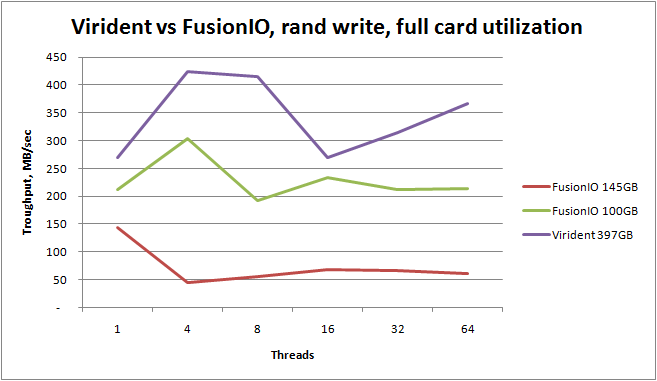 In conclusion I can highlight:

I am looking forward to present results in sysbench oltp, tpcc workload, and also in FlashCahce mode.