Impact of logging on MySQL’s performance

Introduction
When people think about Perconaâ€™s microslow patch immediately a question arises how much logging impacts on performance. When we do performance audit often we log every query to find not only slow queries. A query may take less than a second to execute, but a huge number of such queries may significantly load a server. On one hand logging causes sequential writes which canâ€™t impair performance much, on other hand when every query is logged there is a plenty of write operations and obviously performance suffers. Letâ€™s investigate how much.

I took DBT2, an OSDLâ€™s implementation of TPC-C.
Hardware used
The benchmark was run on a DELL server running CentOS release 4.7 (Final)
There are four CPUs Intel(R) Xeon(R) CPU 5150 @ 2.66GHz, 32GB RAM. There are 8 disks in RAID10(a mirror of 4+4 striped disks).
Software
It was used MySQL 5.0.75-percona-b11 on CentOS release 4.7
MySQL setting
There were two cases considered CPU- and IO-bound.
Each case had three options:

MySQL was run with default settings except following:

Depending on workload different InnoDB buffer was used.
In CPU-bound case

DBT2 settings
For CPU-bound case number of warehouses was 10(1.31GiB). In case of IO-bound load â€“ 100 warehouses which is 10GiB in terms of database size.
The test was run with 1, 20 and 100 database connections
Results
To reduce random error the test was run 3 times per each parameter set.
The metric of a DBT2 test is NOTPM (New Order Transaction per Minute) â€“ the more the better. 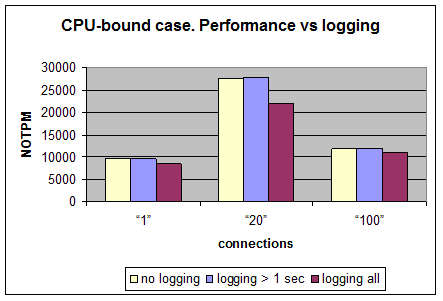 We see here that logging all queries decreases MySQLâ€™s performance on 6-20% depending on a number of connections to a database.
It should be noted during the test it was executed roughly 20-25k queries per second. If all queries are logged â€“ a slow log is populated at rate about 10MB/sec. This is the highest rate observed.
IO-bound case â€“ 100 warehouses 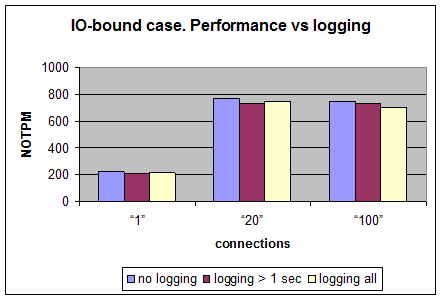 In this case every test was run 5 times and random measurement error was calculated. As it is seen from the chart above the performance almost doesnâ€™t depend on logging â€“ the difference doesnâ€™t exceed the measurement error.

The query rate in this case is about 1000 per second. 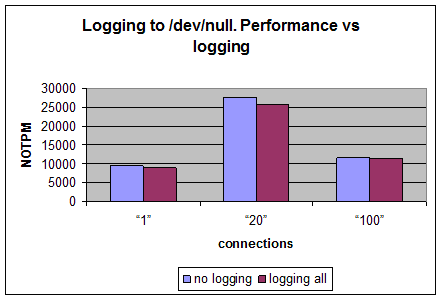 Conclusion
From the all tests above there are two conclusions can be made:

Aleksandr is a consultant and data recovery specialist. He is a former Percona employee.