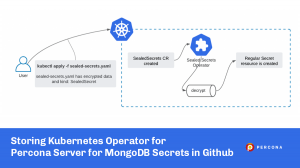 More and more companies are adopting GitOps as the way of implementing Continuous Deployment. Its elegant approach built upon a well-known tool wins the hearts of engineers. But even if your git repository is private, it’s strongly discouraged to store keys and passwords in unencrypted form.

This blog post will show how easy it is to use GitOps and keep Kubernetes secrets for Percona Kubernetes Operator for Percona Server for MongoDB securely in the repository with Sealed Secrets or Vault Secrets Operator.

Sealed Secrets rely on asymmetric cryptography (which is also used in TLS), where the private key (which in our case is stored in Kubernetes) can decrypt the message encrypted with the public key (which can be stored in public git repository safely). To make this task easier, Sealed Secrets provides the kubeseal tool, which helps with the encryption of the secrets.

It will install the controller into the kube-system namespace and provide the Custom Resource Definition sealedsecrets.bitnami.com. All resources in Kubernetes with kind: SealedSecretswill be handled by this Operator.

In this example, I intend to store important secrets of the Percona Kubernetes Operator for Percona Server for MongoDB in git along with my manifests that are used to deploy the database.

First, I will seal the secret file with system users, which is used by the MongoDB Operator to manage the database. Normally it is stored in deploy/secrets.yaml.

This command creates the file with encrypted contents, you can see it in the blog-data/sealed-secrets repository here. It is safe to store it publicly as it can only be decrypted with a private key.

Next, I will also seal the keys for my S3 bucket that I plan to use to store backups of my MongoDB database:

Sealed Secrets is the simplest approach, but it is possible to achieve the same result with HashiCorp Vault and Vault Secrets Operator. It is a more advanced, mature, and feature-rich approach.

Vault Secrets Operator also relies on Custom Resource, but all the keys are stored in HashiCorp Vault:

Create a policy on the Vault for the Operator:

Write down the token, as you will need it in the next step.

Create the Kubernetes Secret so that the Operator can authenticate with the Vault:

It is recommended to deploy the Operator with Helm, but before we need to create the values.yaml file to configure the operator.

Environment variables are pointing to the Secret that was created in the previous chapter to authenticate with Vault. We also need to provide the Vault address for the Operator to retrieve the secrets.

Now we can deploy the Vault Secrets Operator:

Give me the Secret

I have a key created in my HashiCorp Vault: