Real-Time Replication From DynamoDB to MongoDB 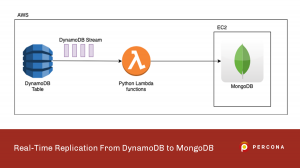 Recently I’ve been faced with an interesting challenge. How can I replicate data, in real-time, from DynamoDB to MongoDB?

Why would I need real-time replication like that? For example:

If you need to migrate data from DynamoDB to MongoDB, there are tools and solutions available on the internet, but basically all of them require stopping the application for some time. There are not a lot of solutions for real-time replication, however.

In this article, I’ll show the solution I have implemented to achieve that.

I’ll show you how to deploy a Replicator for a single DynamoDB table. You can scale to more tables by deploying more Replicators the same way.

DynamoDB stores documents using JSON, the same as MongoDB. This simplifies the development of the Replicator’s code, but the documents still need some little adjustments to be fully compatible.

The solution uses the following technologies:

The Lambda function is automatically triggered when connected to a source stream like the DynamoDB Stream. As soon as new events are available on the stream, the Lambda function is triggered, AWS creates a container and executes the code associated with the function. The number of events processed by any Lambda container is managed by AWS. We have the capability to set some configuration parameters, but we cannot get complete control of it. AWS manages automatically the scaling of Lambda providing all the resources it needs. In case of a very high write load, we can see hundreds or thousands of Lambda invocations per second.

The Lambda function reads the events from the stream, applies some conversions, and connects to MongoDB to execute the operations:

When Lambda finishes computing a batch of events, the container is not immediately destroyed. In fact, a container can be reused by other incoming Lambda invocations. This is an optimization that can help in case of a massive load. As a consequence, you can see thousands of Lambda invocations but fewer running instances.

The following picture summarizes the idea of the solution.

Note: for the sake of simplicity we are using a MongoDB server on an EC2 machine on AWS. But you can eventually replicate to a MongoDB deployed elsewhere, on another cloud platform like Google Cloud for example, or in your on-premise data center. Just remember in this case to open firewall rules, setting up ssh tunnels to encrypt connections or do whatever is needed to enable proper connectivity to the remote MongoDB ports. This is not covered on this article.

Be sure you have aws CLI installed and your credentials stored in the file ~/.aws/credentials.

Create the Execution Role for Lambda

A Lambda function requires a role with specific policies in order to be executed and accessing other AWS resources.

In the IAM dashboard you can create the role lambda-dynamodb-role and assign to it the policies you can see in the following picture:

The Python Code of the Function

Let’s create the following file with the name replicator.py. This will be the code executed by Lambda at each invocation.

Analysis of the code:

As a reference, see below how an event of the DynamoDB Stream looks like: