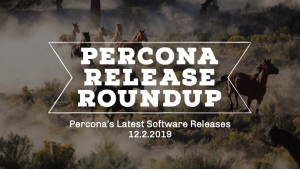 Today’s release post encompasses Percona releases from November 19, 2019 – December 2, 2019. Every few weeks, each roundup showcases the latest in software updates, tools, and features to help you manage and deploy our software, with highlights and critical information, as well as links to the full release notes and direct links to the software or service itself.

On November 20, we released Percona XtraBackup 8.0.8. This release focuses on the support log archiving feature in PXB 8.0, the creation of renewable checkpoints for the MyRocks storage engine, and two options (–-backup-lock-timeout and -–backup-lock-retry-count) added to enable the configuring of the timeout for acquiring metadata locks in FLUSH TABLES WITH READ LOCK, LOCK TABLE FOR BACKUP, and LOCK BINLOG FOR BACKUP statements. Percona XtraBackup enables MySQL backups without blocking user queries, making it ideal for companies with large data sets and mission-critical applications that cannot tolerate long periods of downtime.