Back to the Blog
Dave Avery2016-02-21T10:30:17-05:00
By Dave Avery MySQL Grafana, MySQL Comments Off on Upcoming Webinar Wednesday: Using Grafana for MySQL Monitoring 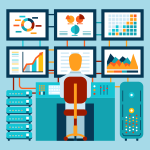 Grafana is the leading graph and dashboard builder for visualizing time series, which is a great tool for visual monitoring of MySQL databases. Come learn how to use Grafana for MySQL monitoring.

In this webinar, Torkel Odegaard, Grafana Founder and Creator, will provide an introduction to Grafana and talk about adding data sources, creating dashboards and getting the most out of your data visualization. Then Peter Zaitsev, Percona Co-Founder and CEO, will demonstrate how to set up Grafana and Prometheus for in-depth, completely open source monitoring for MySQL troubleshooting and capacity planning. They will look into some features Grafana has to offer, explain why different graphs are important and how you specifically can use them to analyze MySQL performance and troubleshoot operational issues.

Peter co-founded Percona in 2006, assuming the role of CEO. Percona helps companies of all sizes maximize their success with MySQL. Percona was named to the Inc. 5000 in 2013. Peter was an early employee at MySQL AB, eventually leading the company’s High Performance Group. A serial entrepreneur, Peter co-founded his first startup while attending Moscow State University where he majored in Computer Science. As CEO of Percona, Peter enjoys mixing business leadership with hands on technical expertise. Peter is co-author of High Performance MySQL published by O’Reilly, one of the most popular books on MySQL performance. Peter blogs regularly on MySQLPerformanceBlog.com and speaks frequently at conferences. Peter lives in North Carolina with his wife and two children. In his spare time, Peter enjoys travel and spending time outdoors.

Creator of Grafana and now co-founder of Raintank, a company that is building and proving a metrics and monitoring platform based on open source software. Torkel was a hobby C/C++ developer in his early teens and university years which later turned into a carrier as a .NET developer with strong focus on maintainability, TDD and agile. The last couple of years has been a love affair with Go, nodejs, messaging architectures, writing deploy automation and other DevOps related tools. He is currently working full time on the open source project Grafana, the leading graph and dashboard builder for visualizing time series metrics.