ProxySQL Tech Talks with Percona is a free online meetup for users of ProxySQL, MySQL and Percona XtraDB Cluster (PXC). At this virtual event we will provide recommendations to our fellow MySQL DBAs on how to better configure and manage MySQL/PXC clusters at scale.

7:05 PM CEST - Talk 1. "ProxySQL, the journey from a MySQL proxy to being the de-facto multi-functional tool that scales MySQL" by René Cannaò (ProxySQL)

ProxySQL, the journey from a MySQL proxy to being the de-facto multi-functional tool that scales MySQL

ProxySQL has had a stable, generally available release since December 2015, and since that time has moved from Version 1.x to Version 2.x, now with a more fast track release cadence. The goal of this hour long webinar is to go through some of our design principles and how we have managed to progress from database proxy to multi-function tool that so many benefit from.

ProxySQL 2.0 has so many new features, from setting up causal reads for read consistency using GTIDs, down to support for AWS Aurora, LDAP authentication, and SSL for client connections.

However beyond just a high level introduction to these features, some of which will be covered in-depth during the next part of this webinar, we will focus a little on the native support for Galera Cluster and Percona XtraDB Cluster (PXC) which made its debut since ProxySQL 2.0.0. Since then it has been enhanced in 2.0.8, 2.0.10, and 2.0.11 and it also supports extensions like pxc_maint_mode.

We will also cover some of our future plans, and answer such questions such as, is it possible to run ProxySQL in Kubernetes, backed by a Percona XtraDB Cluster (PXC) within Kubernetes? Why, yes, it is! Extensions to monitoring that could be very well consumed by Percona Monitoring & Management (PMM) will also be covered.

In this session, I will cover the new functionalities introduced by ProxySQL 2.X and how simple became when we compare to ProxySQL 1.X versions when it was necessary to use an external script with the scheduler. A demonstration will show how to configure ProxySQL for PXC. Subsequently, new functionalities will be covered to explore the potential of the new version using SSL in the front end to communicate with the application and how to avoid causal reads. And to close the session, how to actively monitor your ProxySQL instance most important parameters such as connections(backend and frontend), cache efficiency, network and others using Percona Monitoring and Management 2 (PMM 2).

René Cannaò is the CEO of ProxySQL Inc and author of ProxySQL. He has nearly two decades of working experience as a system, network and database administrator mainly on Linux/Unix platforms. Since 2008, his career has been focused on MySQL, having worked as a Senior MySQL Support Engineer at Sun Microsystems/Oracle, as an operational DBA and Lead Engineer at Blackbird IT (formerly PalominoDB), and has consulted for companies like Dropbox. During these periods he built an analytic and problem solving mindset, thus is always eager to take on new challenges, especially if they are related to high performance. Apart from managing the overall operations and resources of the company René directly manages the ProxySQL Engineering team and is heavily involved in the development of ProxySQL. 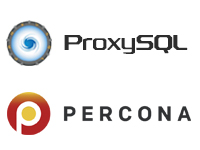