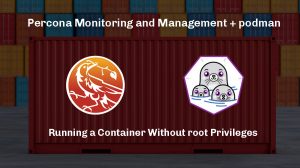 In this article, we will take a look at how to run Percona Monitoring and Management (PMM) Server in a container without root privileges.

Some of the concerns companies have about using Docker relate to the security risks that exist due to the requirement for root privileges in order to run the service and therefore the containers. If processes inside the container are running as root then they are also running as such outside of the container, which means that you should take measures to mitigate privilege escalation issues that could occur from container breakout. Recently, Docker added experimental support for running in rootless mode which requires a number of extra changes.

From a personal perspective, it seems that Docker tries to do it “all in one”, which has its issues. While I was looking to overcome some gripes with Docker, reduce requirements, and also run containers as a chosen user regardless of the process users inside the container, podman and buildah caught my attention, especially as podman also supports Kubernetes. To quote the docs:

Podman is a daemonless container engine for developing, managing, and running OCI Containers on your Linux System. Containers can either be run as root or in rootless mode.

In order to use containers without the need for root privileges, some initial configuration is likely to be needed to set the mapping of namespaces, as well as a suitable limit. Using the shadow-utils package on CentOS, or uidmap package on Debian, it is possible to assign subordinate user (man subuid) and group IDs (man subgid) to allow the mapping of IDs inside a container to a dedicated set of IDs outside the container. This allows us to resolve the issue where a process is running as root both inside and outside of a container.

The following is an Ansible task snippet that, on a dedicated CentOS machine, makes the necessary changes, although you may need/want to adjust this if already using namespaces:

This set of tasks will:

OK, so if all is well, then the system is configured to support user namespaces and we can run a container without needing to be root (or a member of a special group). The commands for podman are identical, or very close to those that you would use for Docker, and you can even set alias docker=podman  if you wish! Here is how you could test PMM Server (v2) out, mapping port 8443 to the NGINX port inside the container:

In the previous command, the path to the registry is explicitly stated as being a Docker one, but if you were to simply specify percona/pmm-server:2 then by default a number of registries are checked and the first match will win. The list and order of the registries differ per distro, e.g.

The container for PMM server is now running as the user that executed the podman command, so we can take a look and see what the processes look like. First, let’s take a peek inside the container:

We can see all of the processes that run as part of PMM, plus the ps command that was executed to look at the processlist.

Now, let’s take a look outside the container to see what these processes show up as:

Processes running outside the container
Shell

Using persistent volumes for your data

The documented way to use PMM with persistent volumes does not work in the same manner with podman. However, it is easily fixed as follows (plus we get to try out buildah):

It is easy to get PMM server running in a container with podman and buildah while also increasing the security from the outside by restricting the user privileges for the processes.

And while you may not be able to replace Docker usage in certain circumstances, taking a look at podman and buildah is definitely recommended… and you can still use the Docker registry if that is the only location for the image that you want to run.

If you haven’t tried PMM2 yet then you can easily test it out or take a look at the online demo.