The MySQL 5.6 Release has introduced some changes to how two phase commit works and is managed.  In particular, the commit phase of transactions to the binary log is now serialized and this behavior is something we identified fairly immediately.  We implement a group commit algorithm that needed to be altered so that TokuDB’s group commit to its recovery log would function effectively.

As part of our effort to verify the new Binary Log Group Commit functionality introduced in TokuDB 7.5.4 for Percona Server, we wanted to demonstrate the substantial increase in throughput scaling but also show the bottleneck caused by the skewed interaction between the binary log group commit algorithm in MySQL 5.6 and the transaction commit mechanism used in TokuDB 7.5.3 for Percona Server.  During our testing, we noticed that the throughput scaling was diminished when we turned on the binlog.

Here are the relevant system specifications from our test environment:

Sysbench was the application we decided to use once we configured our test environment.  In particular, we chose a fairly simple workload from sysbench called update_non_index.lua as our workload because of its simple nature and determinism as it could be applied to TokuDB before and after the introduction of the Binlog Group Commit enhancement.

We created a single table that contained 1M rows and kept the table small enough to fit in memory so the test could isolate the measurement of I/O written to the logs.

Here is what the function looks like inside lua:

I wrote a small bash script that would essentially take the prepare phase of sysbench and create a table that would be the target of this workload.  It is important to reemphasize as well that the dataset would need to be kept in memory and as a result, the sysbench parameters and my.cnf would need to be configured such that these requirements would be met.

The relevant parameters for MySQL and TokuDB are as follows:

Within the bash script that calls sysbench, I decided to use a table with 1 million rows to keep the dataset in memory and a simple for loop to increment the thread count by a factor of 2.  One of the nice features of sysbench is that as a C program it uses a MySQL connection with autocommit=ON which means that each statement is executed in its own transaction.

Here is the aforementioned block that executes the sysbench run portion of the workload:

I have also piped the output to grep for the thread count and read/write request metrics and used gnuplot to show the results from our testing. 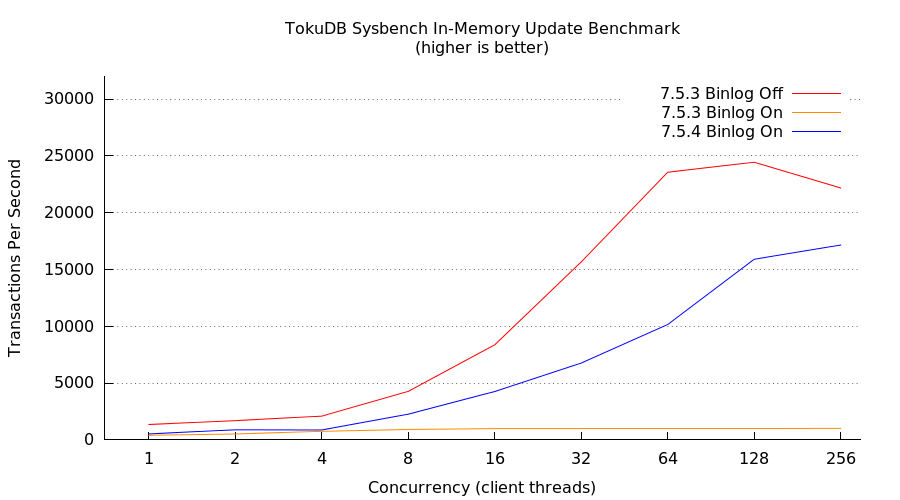 As a result, with the binlog turned on AND the optimization as part of TokuDB 7.5.4 for Percona Server, we can see the bottleneck has been reduced and the throughput can scale accordingly.

In this case, one can see that the improvement is about 17x more read/write throughput.